“A mature and well-balanced proposal, and devised with great care as well. The various elements have been studied and worked out meritoriously...The squares so formed are spatially intact. The dwellings in the new buildings are skilfully designed, efficient and feasible. The use of the old buildings has also been studied very well in the proposal. The solutions are realistic while preserving and respecting the existing building stock. The proposal links the new and old buildings together successfully by means of facade treatments and materials, making it a well suited basis for detailed planning.”

Extract from the jury assessment

The imposing group of buildings on the Kakolanmäki hill in the heart of Turku dominates the townscape, when one approaches from the sea. Kakolanmäki is one of “the seven hills of Turku”, which C. L. Engel’s town plan of 1827 left unbuilt. In 1845–1853, a correctional facility representing the most advanced prison architecture of the time was built there, and several buildings were constructed in the late 19th and early 20th centuries. The Kakolanmäki hill area with its buildings and parks is listed as a nationally significant cultural environment, and it is one of the most remarkable hill landscapes in Turku.

The original operations in the old prison buildings came to an end in 2007, when a new prison was completed in the Saramäki district. In 2004, the City of Turku and the Senate Properties organised an open international ideas competition for the Kakolanmäki area in order to find a top-grade solution to connecting the prison area with the surrounding urban structure in a natural way and changing the use of the old buildings. The competition area was about 20 hectares and the total area of preserved buildings about 40,000 square metres.

Our proposal, “Linnavuori”, shared second prize in the competition; no first prize was awarded. Our basic idea was to preserve all essential parts of the natural conditions with valuable old trees and the existing building stock with its historical layers. The new buildings were put in the best suitable places in the area. In this way, the distinctive characteristics of the hill come forth and its presence in the city’s silhouette is highlighted and refined. The proposal was selected as the basis for detail planning. The proposed plan enables the new building of 60,000 square metres.

The new buildings of our proposal are designed for housing. Meeting the demand of the early 2000s, they contain versatile dwelling types, which are varied, interesting and individual, offer possibilities for adaptation, and have diverse dwelling-specific outdoor spaces. The distinction of the urban blocks from the surrounding nature is clear and accentuated. Each block derives its shape from the nearest environmental feature. For instance, the steep wall of an old stone quarry forms a beautiful backdrop to a curved block, and the rocky topography at the eastern and western ends of the area recurs in the forms of built curves.

The proposed street network is almost entirely based on existing routes. An alternative alignment is proposed for Hansakatu street, making it possible to expand the green route, important in the urban structure, on the northern slope of the Kakolanmäki hill, and lead it across the street via a pedestrian and bicycle overpass. Our proposal also includes a funicular between the hilltop and the river Aurajoki and the Föri city ferry.

In keeping with the competition programme, parking is situated mainly underground in a way that observes the needs of dwelling, business, office, conference and hotel functions. The handsome rocky slope facing the eastern end of the Amiraalistonkatu street is preserved. Drilling through the rock surface is to be done behind the slope and the top is to be landscaped into its original shape as nearly as possible.

Commissioned by the landowners, we studied new uses for the old buildings according to several scenarios. The prison buildings were studied as to how they could accommodate offices, health and well-being services, sheltered housing and culture services. We fitted sheltered housing and housing for mobile workers or, alternatively, affordable housing in the detention centre. The mental hospital for prisoners was found adaptable to a private hospital or, alternatively, a residential building with large common facilities. The old residential buildings were proposed to remain in residential use.

In our concept, the new residential buildings are reconciled with the old buildings in their materials. Red brick is the principal material in the vicinity of the detention centre and grey rendering in the western part of the area, where it suits together with the grey Kakola granite of the old buildings nearby. 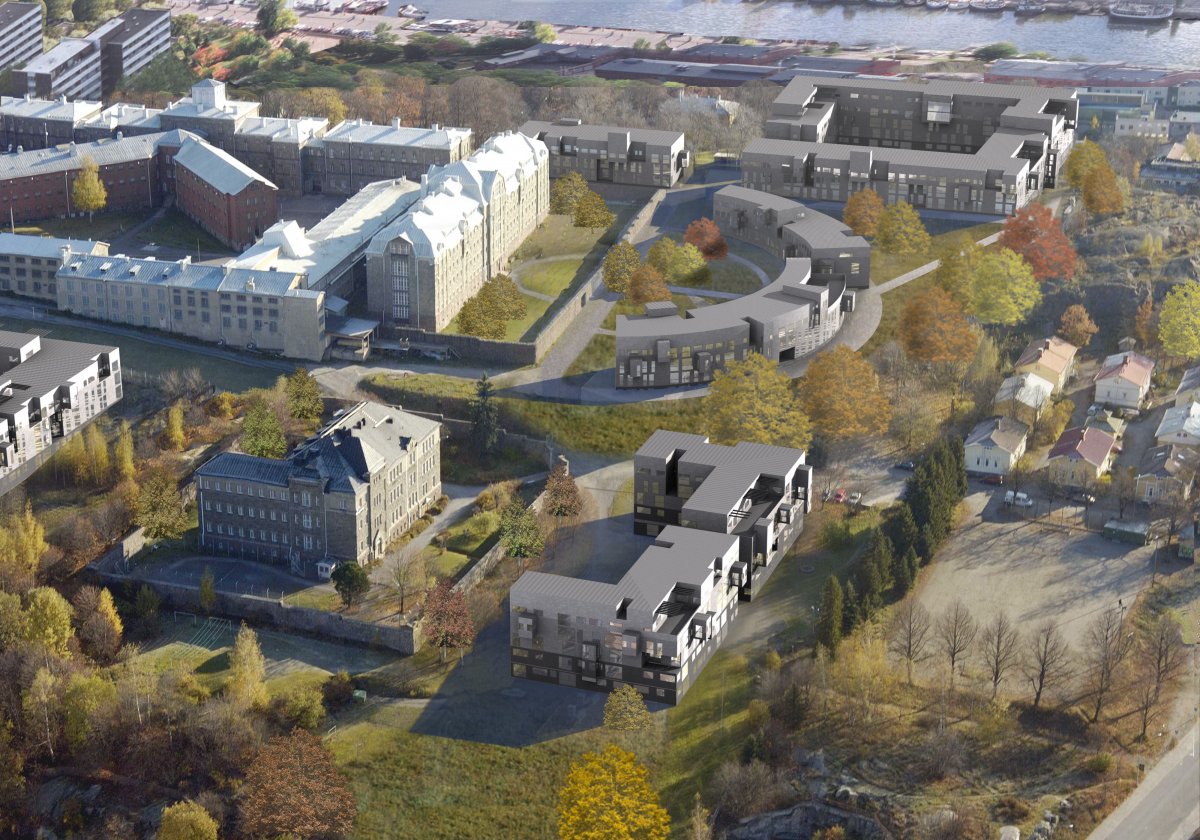 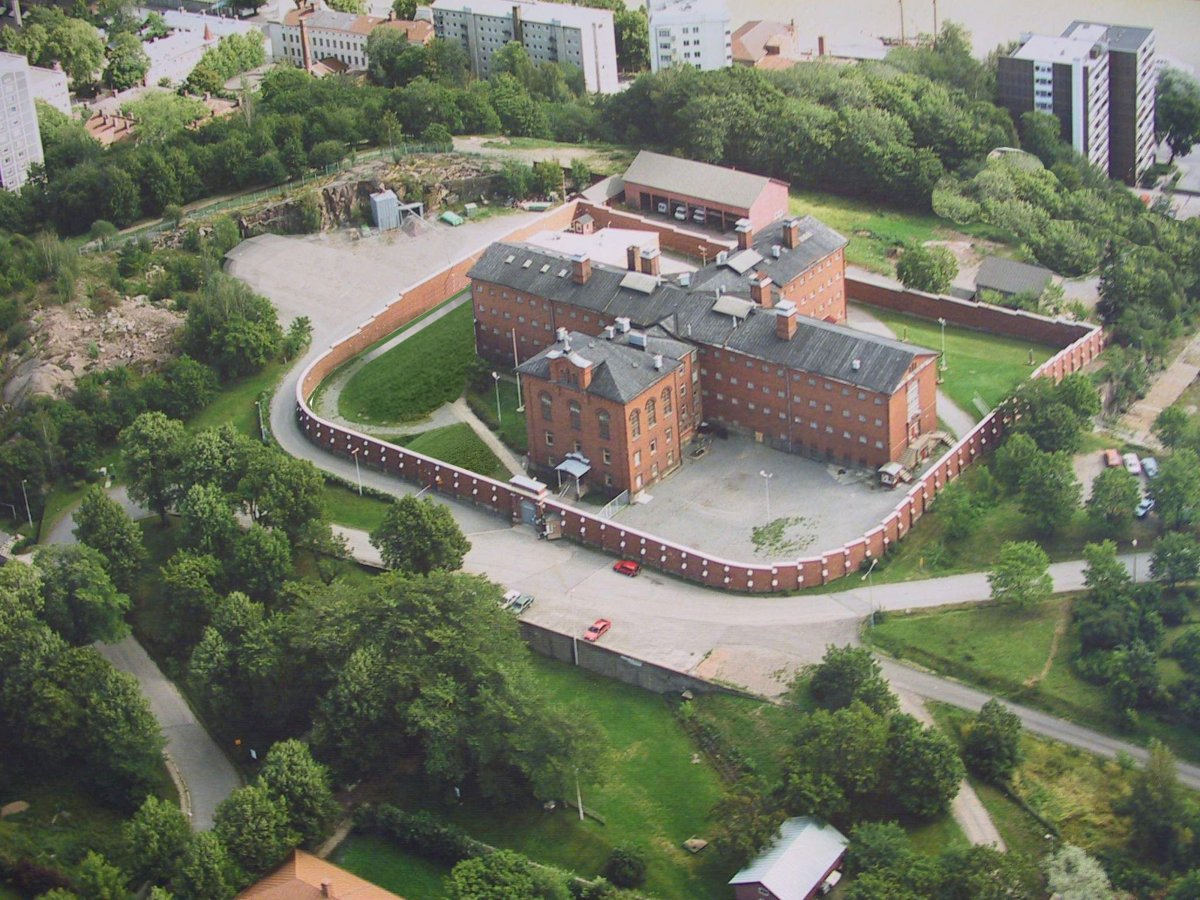