In the early 1800s there were two separate islands in the place of today’s Siltasaari district. Bridges connected them to each other and to the mainland both southwards and northwards. In the 1876 map of Helsinki the smaller island had merged into the bigger one. The middle area of the island was occupied by a wallpaper factory and the eastern shore by a swimming house. Today’s Kallio district north of the island was almost unbuilt, apart from a number of machine shops. In 1846 the city had parcelled out the land north of Siltasaari into villa lots and industrial lots and the land further away into cultivation areas and pasture areas. The filling of the strait began in 1886, and a worker community began to form on the northern side of the southbound bridge. Later known as Puu-Kallio (‘wooden Kallio’), the district was almost entirely razed to give way to blocks of flats in the 1960s and 1970s.

The beginnings of the Wärtsilä company are in a sawmill established in the village of Värtsilä in Tohmajärvi in North Karelia. Nils Ludvig Arppe, born in nearby Kitee, bought the sawmill in 1836 and built an ironworks by its side in 1851. From a consortium of a sawmill and an ironworks Wärtsilä has grown into a listed company employing about 3,600 people in Finland. The address of its headquarters, Johan Stenbergin ranta (‘Johan Stenberg shore’) 2, refers to the machine shop that formerly occupied the site, established by Johan Stenberg in 1882, bought by Wärtsilä 1975 and merged with the owner company in 1980. Johan Stenberg’s shop, which had 200 workers in 1912, manufactured motors, boilers and goods lifts. Stenberg’s foundry operated in nearby Hakaniemi until 1956.

At the beginning of the 20th century there were low brick workshops, an office building and a wood-structured boatyard and dock on the site of the machine workshop, and on the Siltasaarenkatu street side a beautiful two-storey villa with corner tower and corbie gable. The high industrial building of red brick was constructed in 1939 to designs by Yngve Lagerblad. It has housed the headquarters of Wärtsilä since 1978.

The design of the headquarters concerned simultaneously the completion of the urban fabric, new building, renovation, fitting the existing building and extension together, and creation of a new kind of office environment. The new building hides in its entirety inside the city block and is connected to the listed old building by link bridges; otherwise the new and old volume are totally separate from each other.

The main entrance to the headquarters is on the side of the shoreline park, by the sea. The new building was clad with mould cast Ruukintiili brick, which resembles the brick used in the old building. The windows of the offices are relatively small so that the scale of the facades is in line with the environment. Their breadths and positions are different on different floors. All offices are different, which brings variety to the interiors. The lobby-cum-canteen has a glass wall the height of the building and a glass roof.

The aim was to achieve open combinations of landscape, separate rooms and lounging areas, in which clusters of separate rooms divide the landscape into smaller units, say according to work groups. The work areas of both the old and the new building have views of glass-covered bridges and the lobby. Each floor has a few quiet rooms for dealing with personal matters, phone calls, or work that requires special peace. Recreation and common areas are located at bridge junctions, so communication and social intercourse take place as if unnoticed when people move around in the office areas.

The lobby and link bridges have floors of industrial oak parquet, the reception area of yellow travertine, and the offices of yellow linoleum. The steel units of the ceiling / roof, window and bridge structures and louvre walls are treated with grey metallic colour. A typical office floor in the new building is about 350 m² in size and contains 12–16 work places, depending on furnishings. In the renovated building, the size of a floor is about 900 m² and it has 32–38 work places with meeting rooms and auxiliary spaces. The walls of the offices are movable prefabricated elements, whose places have been taken into account in ventilation, electricity and ceiling systems. When a corridor wall or partition walls are moved, no arrangements need to be made above the ceiling. There are 63 parking places on three basement floors. Wärtsilä will move from Siltasaari to Salmisaari during the summer of 2018.

Further information on the history of the islands of Helsinki in Tikkanen Sallamaria, Paratiisit ja niiden varjot, on the webpage Ympäristöhistoria. 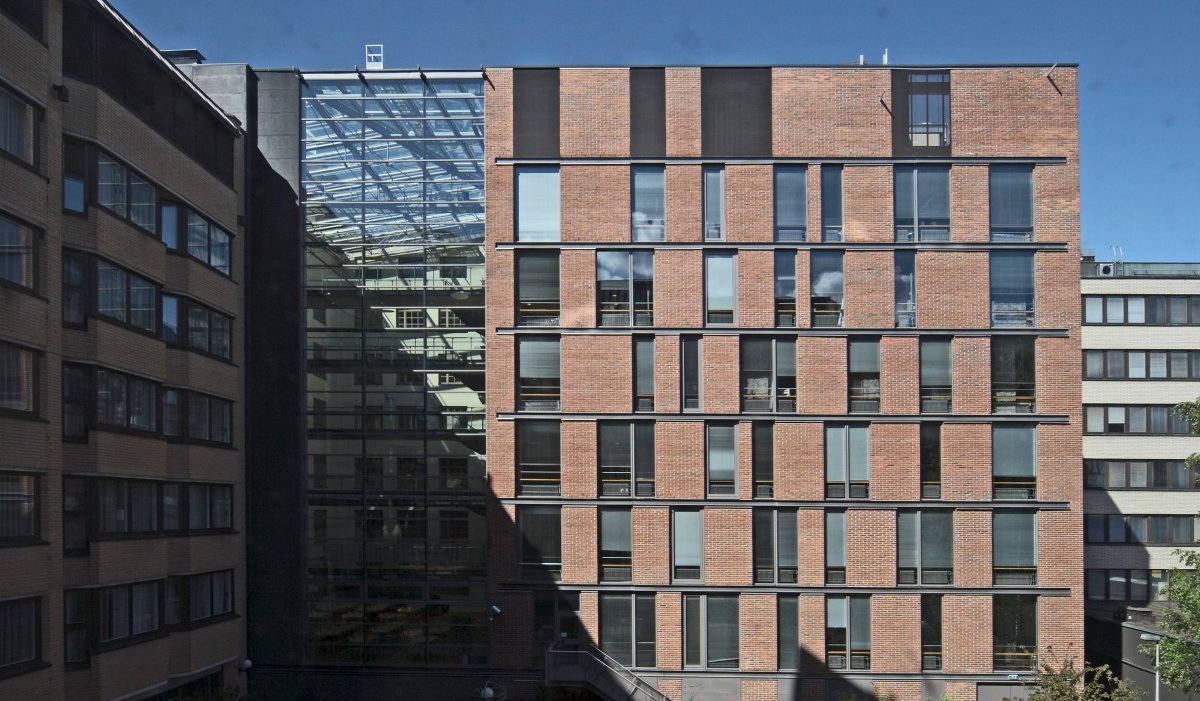 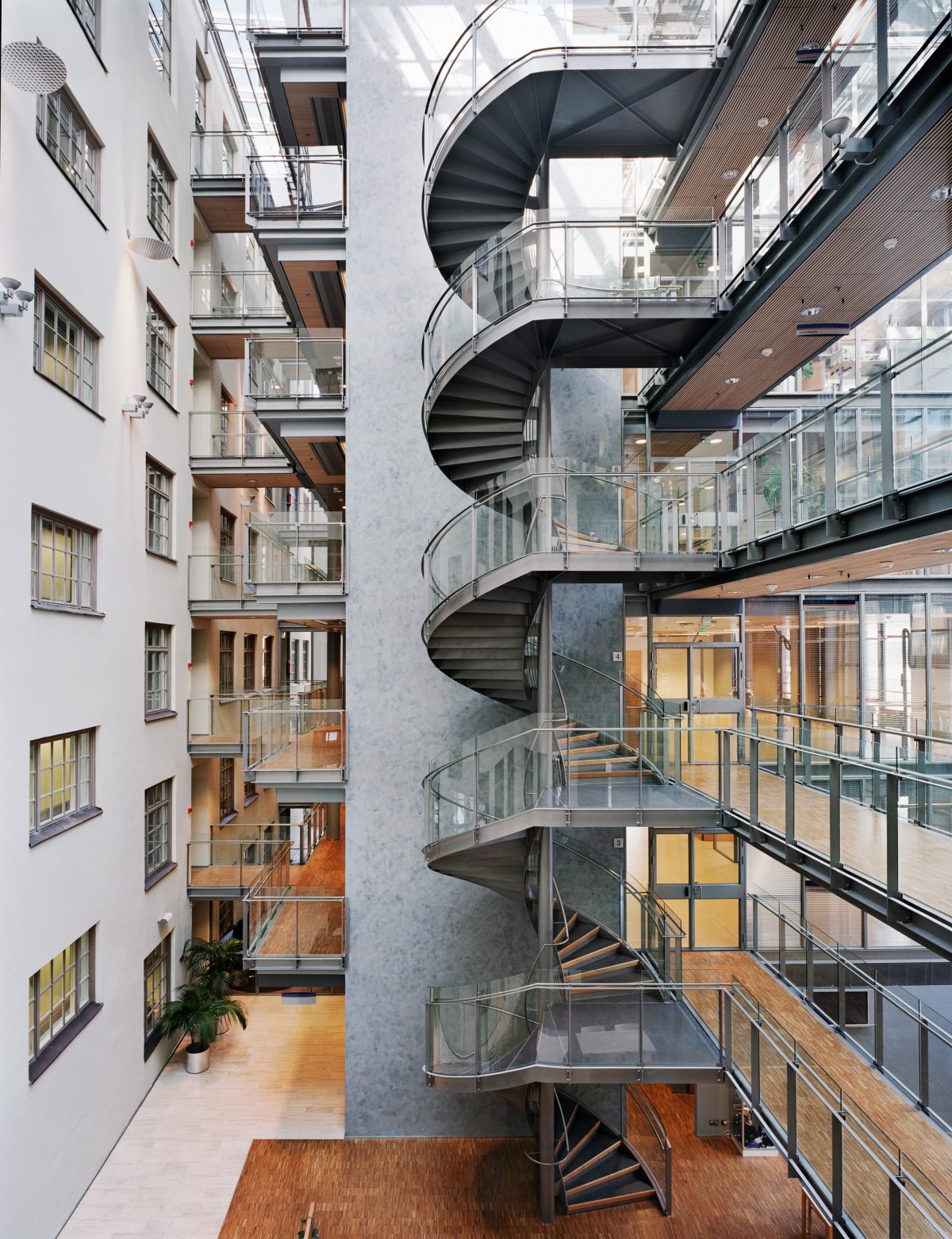 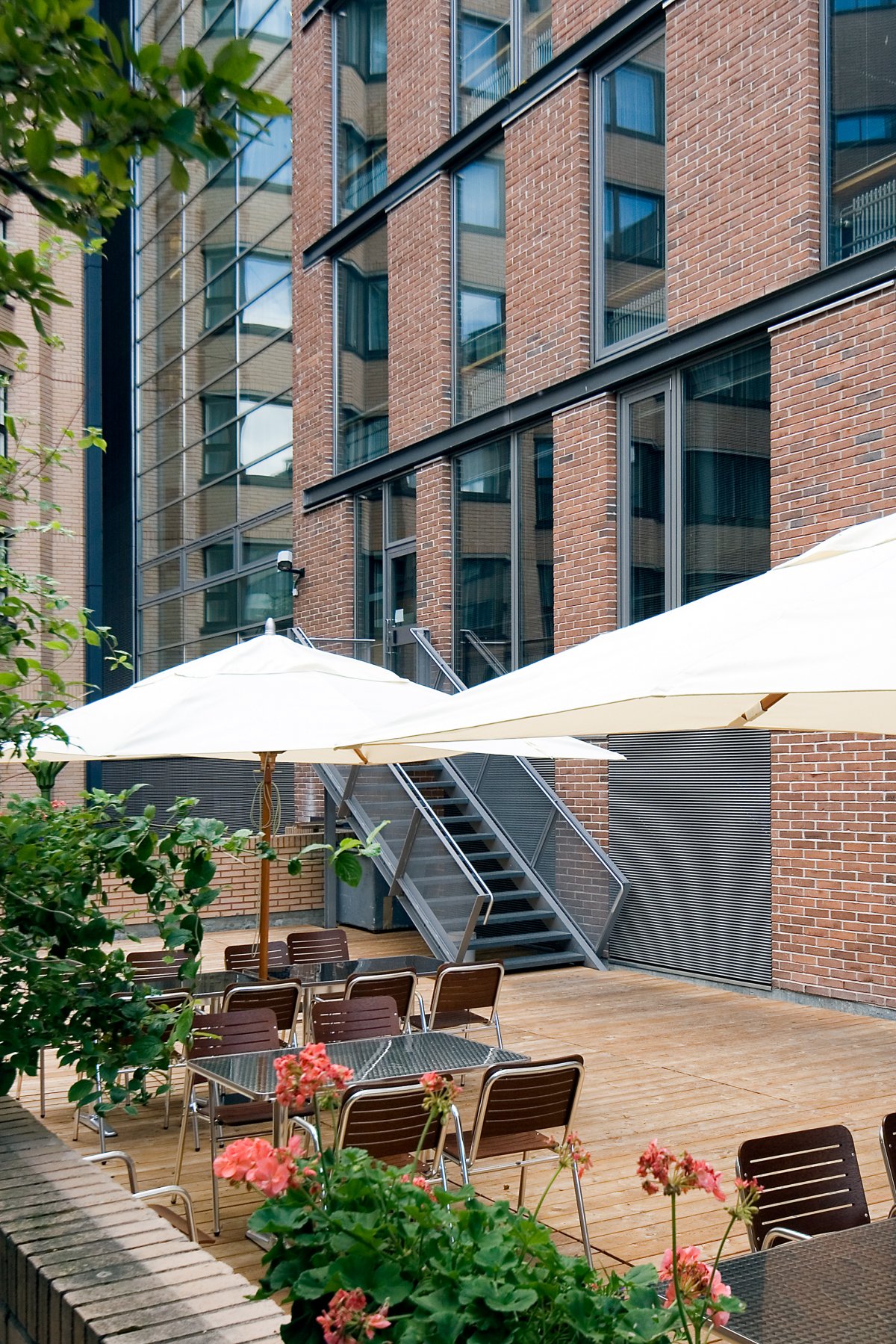 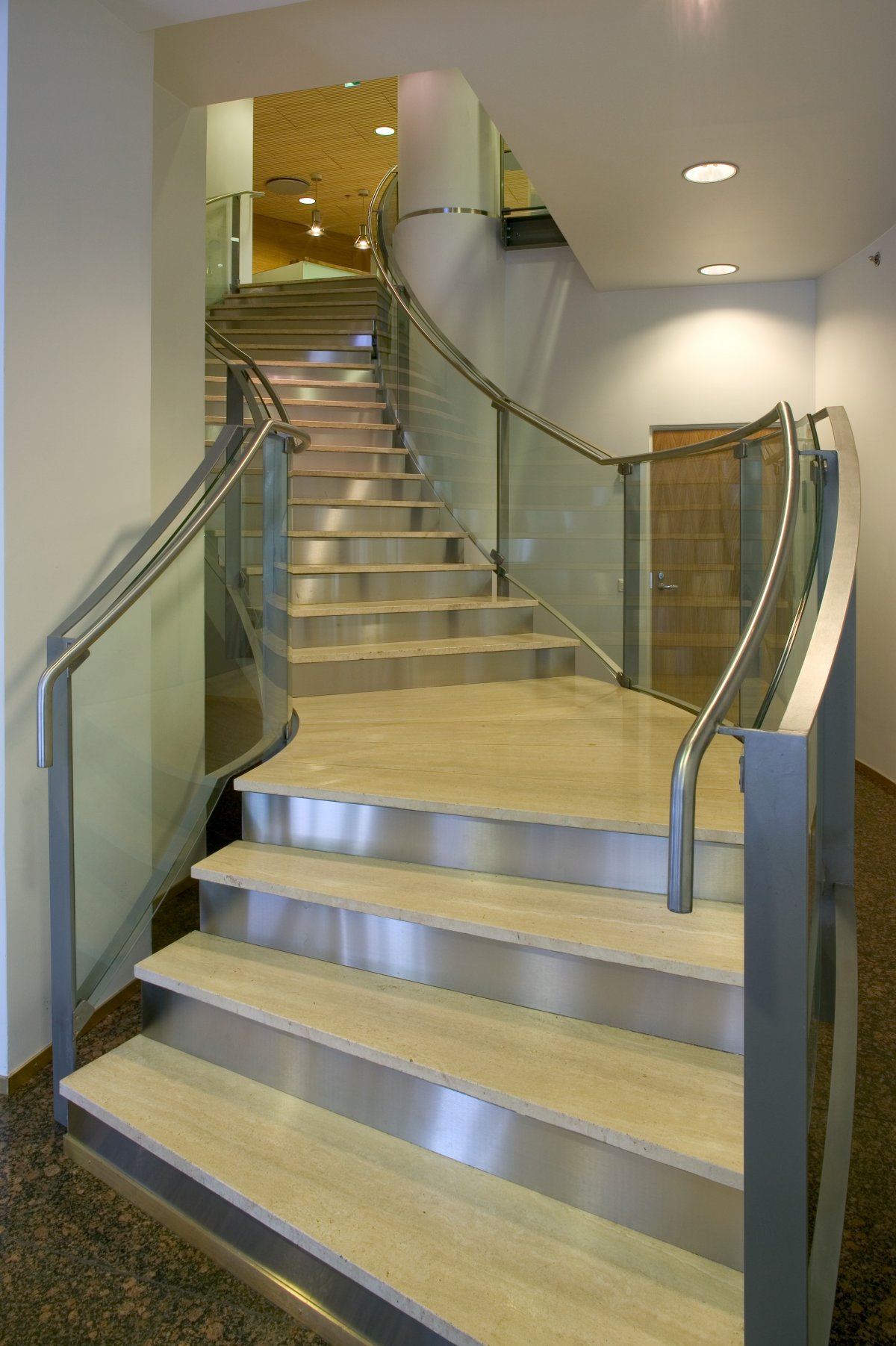 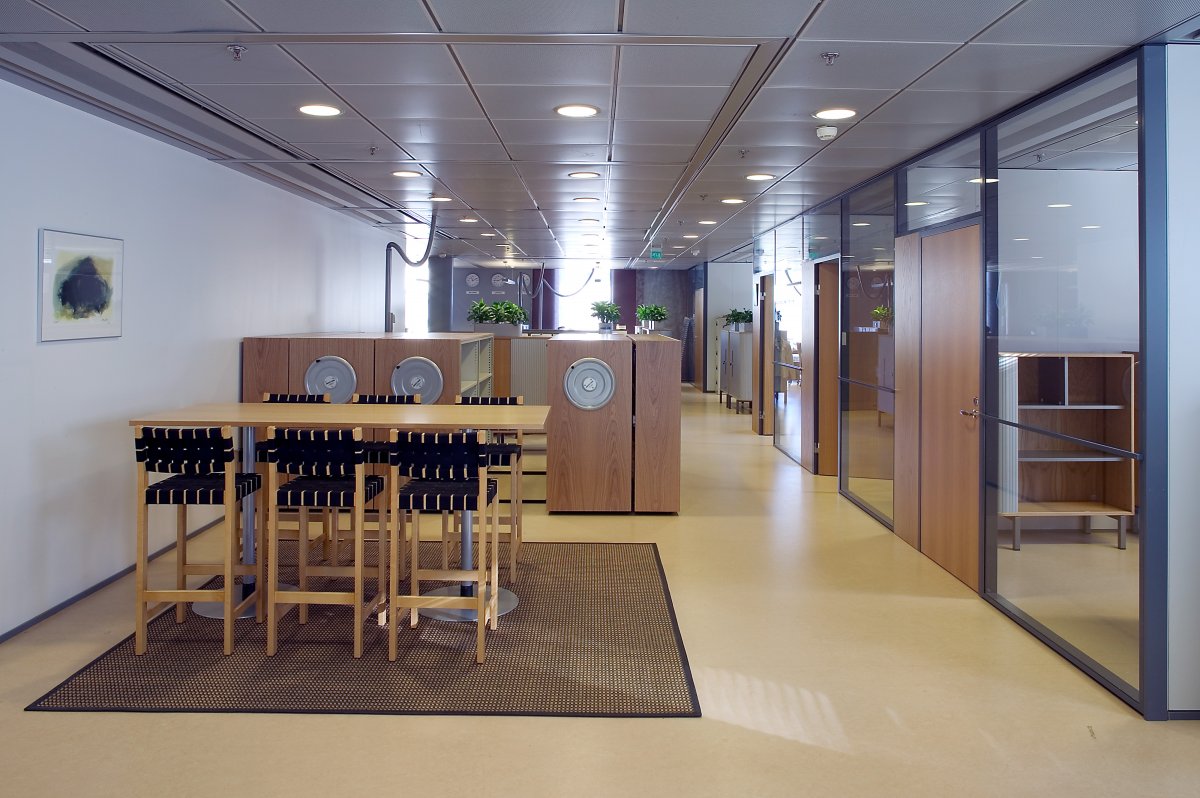 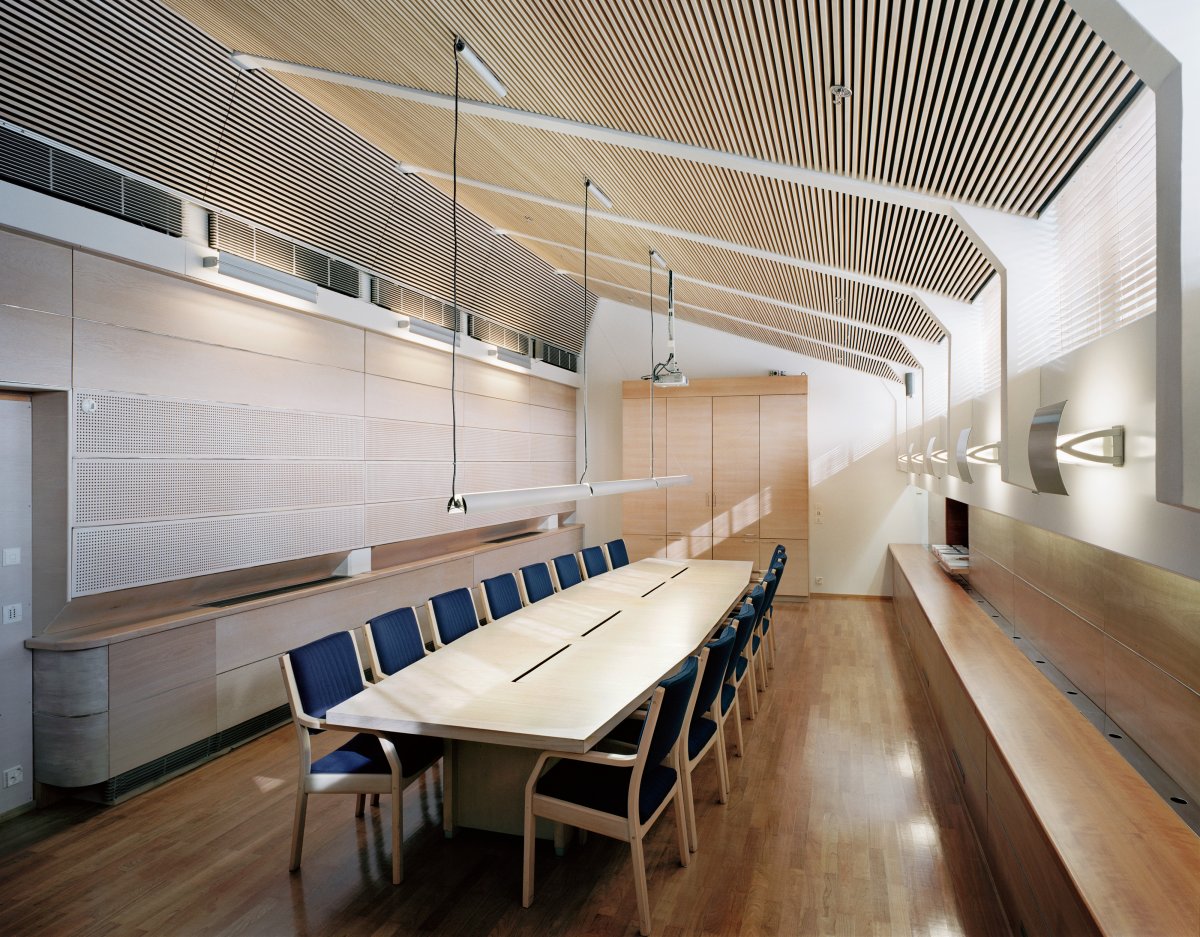