The former UPM headquarters was located at the south-western corner of the Market Square on a site bordered by three streets. The original building stock on the site consisted of L-shaped Empire style buildings of two storeys and pertaining narrow intermediate buildings. The only building in the neighbourhood remaining from this construction phase is Eteläranta 16 located on the eastern side of the city block; it shows the scale of the cityscape before the 1910s.

The UPM building was constructed in two phases. The first part, completed in 1912, was designed by Karl Lindahl. It surrounds the northern end of the site. The architecture was modern at the time, combining motifs of the fading National Romanticism with Classicist influences. The grey facade of natural stone is symmetrical and heavy in proportions. This impression is strengthened by a later heightening of the building. In 1952 an extension was built to designs by Ole Gripenberg, extending through the site on the south side of the first building. The eastern facade of the extension continues the grey stone cladding of the first building, but its western facade has mineral rendering; only the ground-floor cladding is of stone. The windows on both sides are rectangular and placed regularly in vertical and horizontal lines. Before the renovation of 2006, both buildings had undergone several repairs and alterations and the original interior furnishings had been replaced by new ones.

The starting point of the renovation design was a modern, international company, whose businesses comprise wood processing and industrial manufacturing of wood products. The functional and architectural character of the headquarters was assessed from a new perspective, with consideration of both the traditions and the future prospects of the company. The interiors were to highlight professional skills of design and manufacture in wood products and furnishings.

The biggest change occurred in the inner courtyard, which was altered into a 9-storey high glass-covered atrium. UPM’s wood products were used in all spaces innovatively and as largely as possible. A wall in the staff restaurant was clad with a relief made of 70-mm thick cross-bonded plywood board. The boards were sawn at a 45-degree angle into triangular parts, which were assembled into a three-dimensional wall cladding. It would be possible to adapt this solution for wider production of acoustic cladding.

New chairs and tables were designed for the restaurant, using birch plywood for the frames and oak for surfaces. The lounge of the managing director was supplied with custom-made sofas, chairs and low tables as well as a sofa-bookcase combination that serves as a room divider. The 7th floor was furnished as the management’s meeting rooms.

The entrance lobby retained Ole Gripenberg’s basic solution, but the walls were treated with white stucco paint and the furnishings were renewed. Sculptor Matti Haupt’s work Wood Nymph, which had received the entrants since the 1950s, followed the staff to the new premises of UPM on Alvar Aallon katu street in 2013. 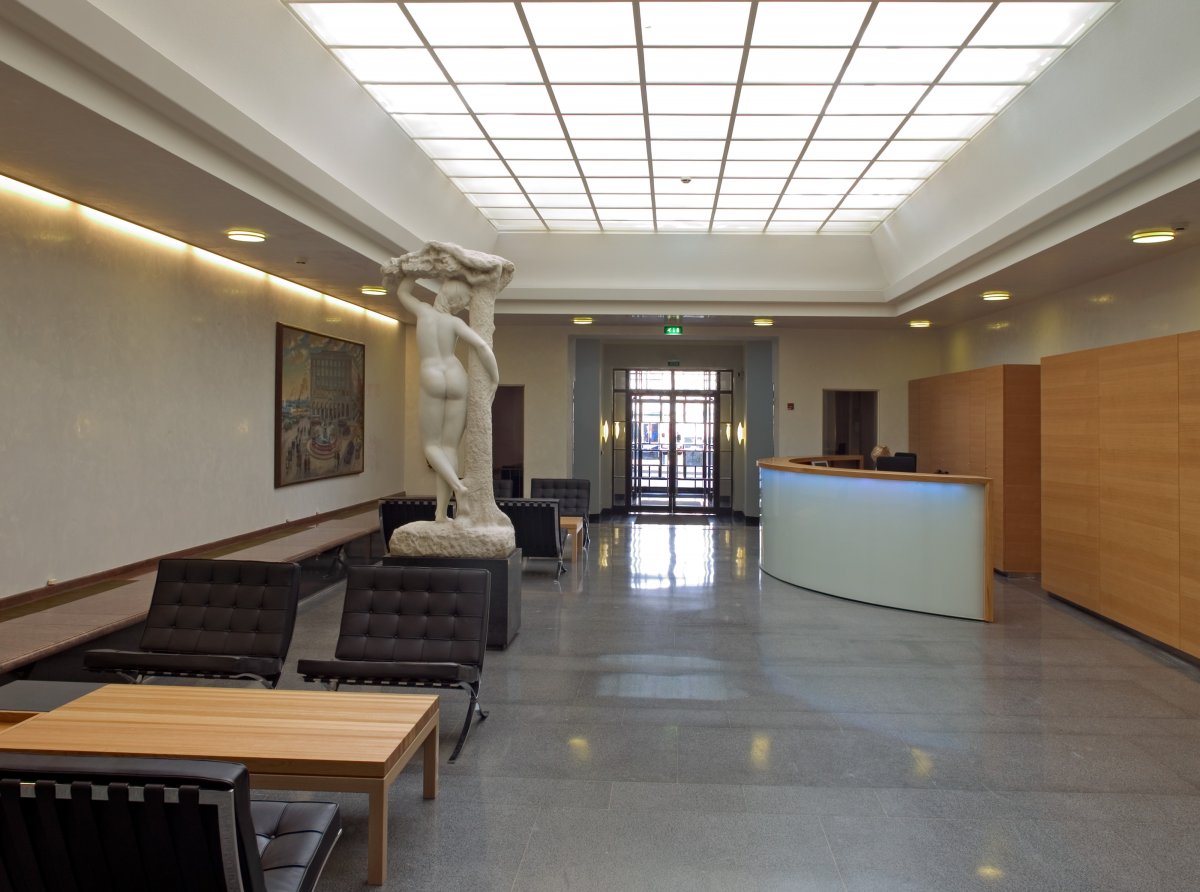 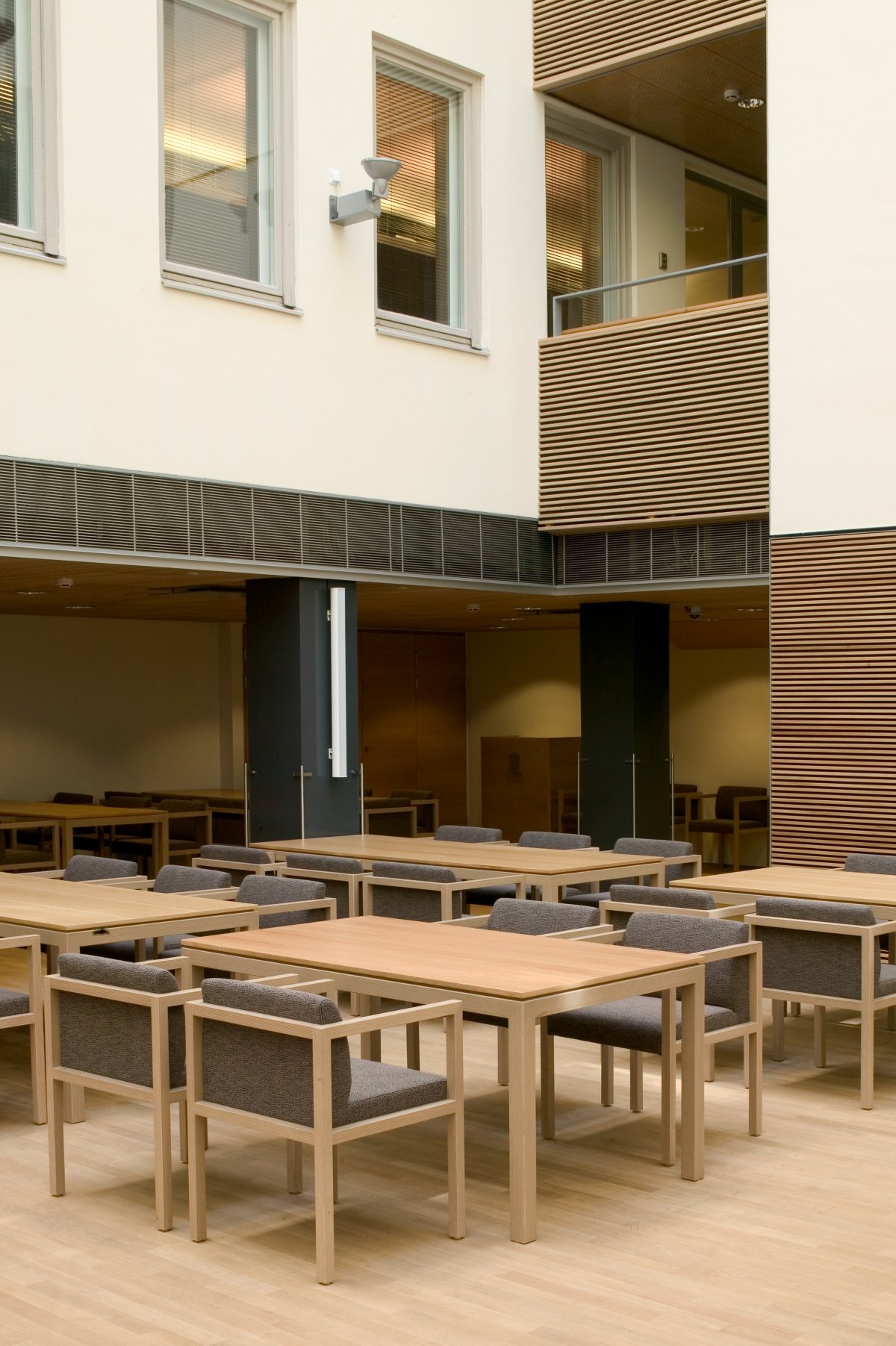 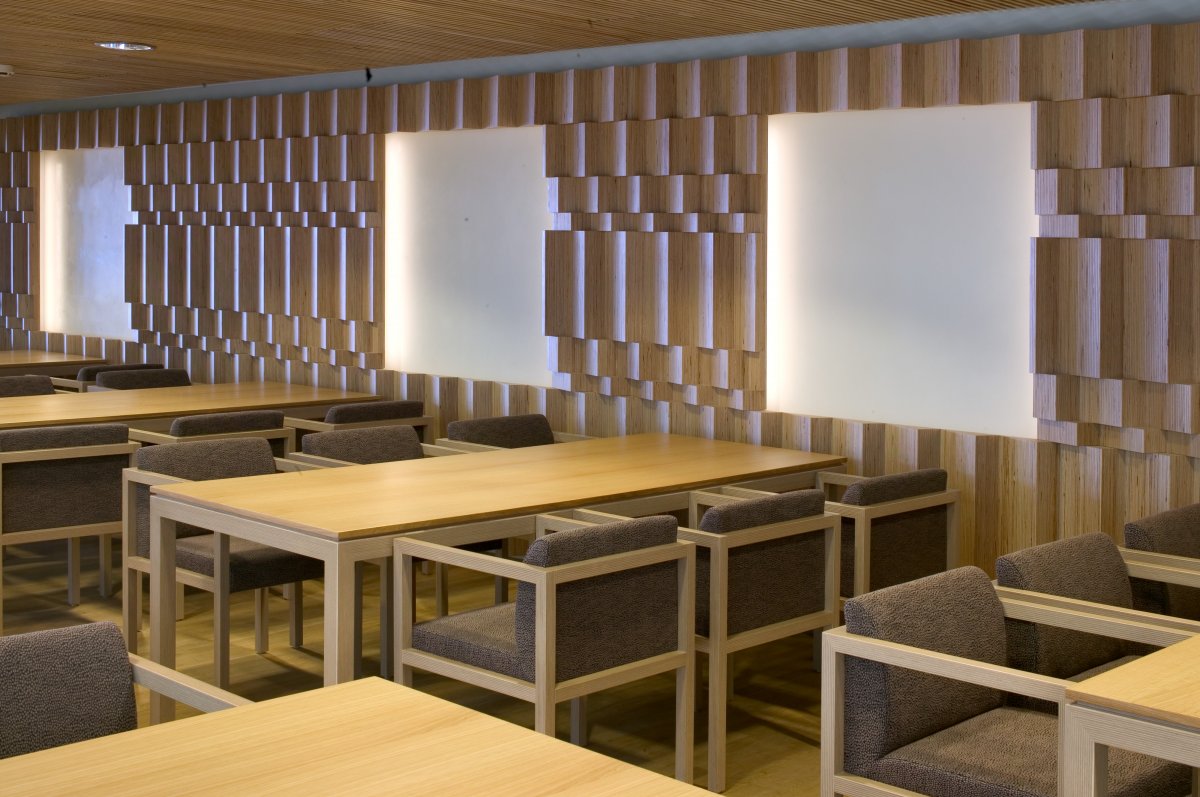 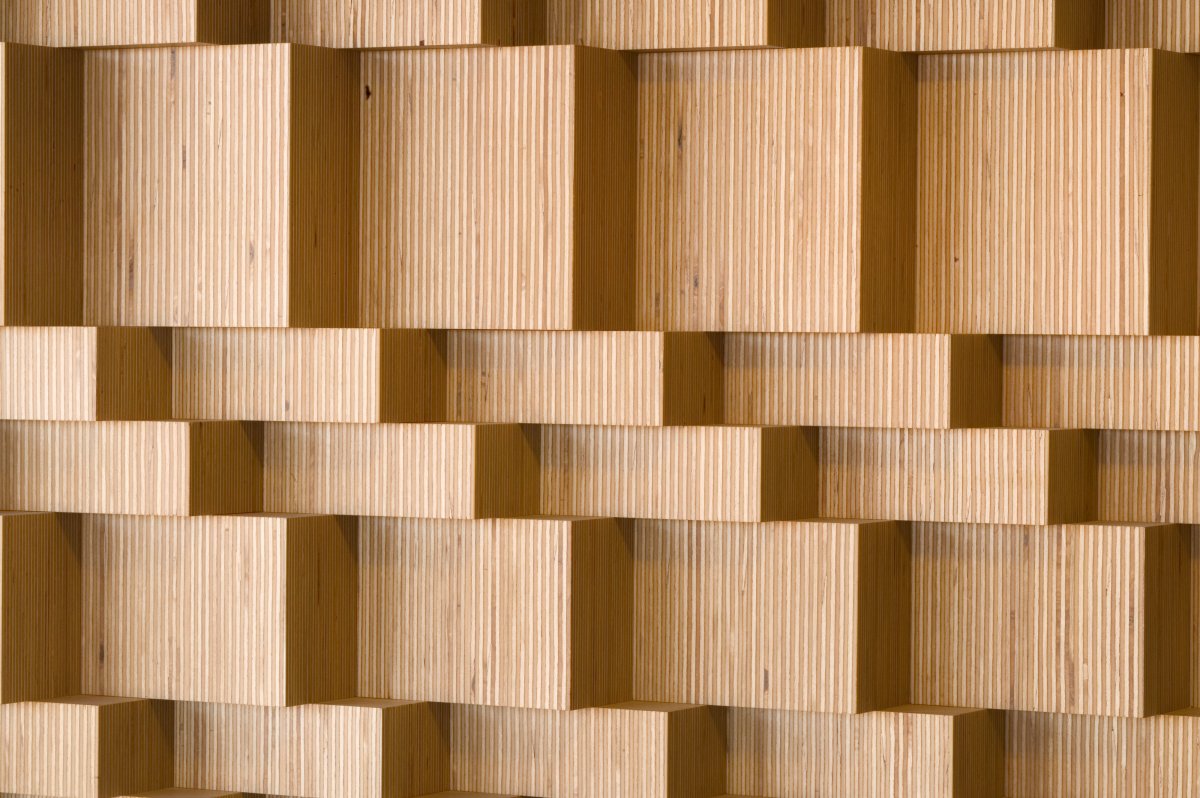 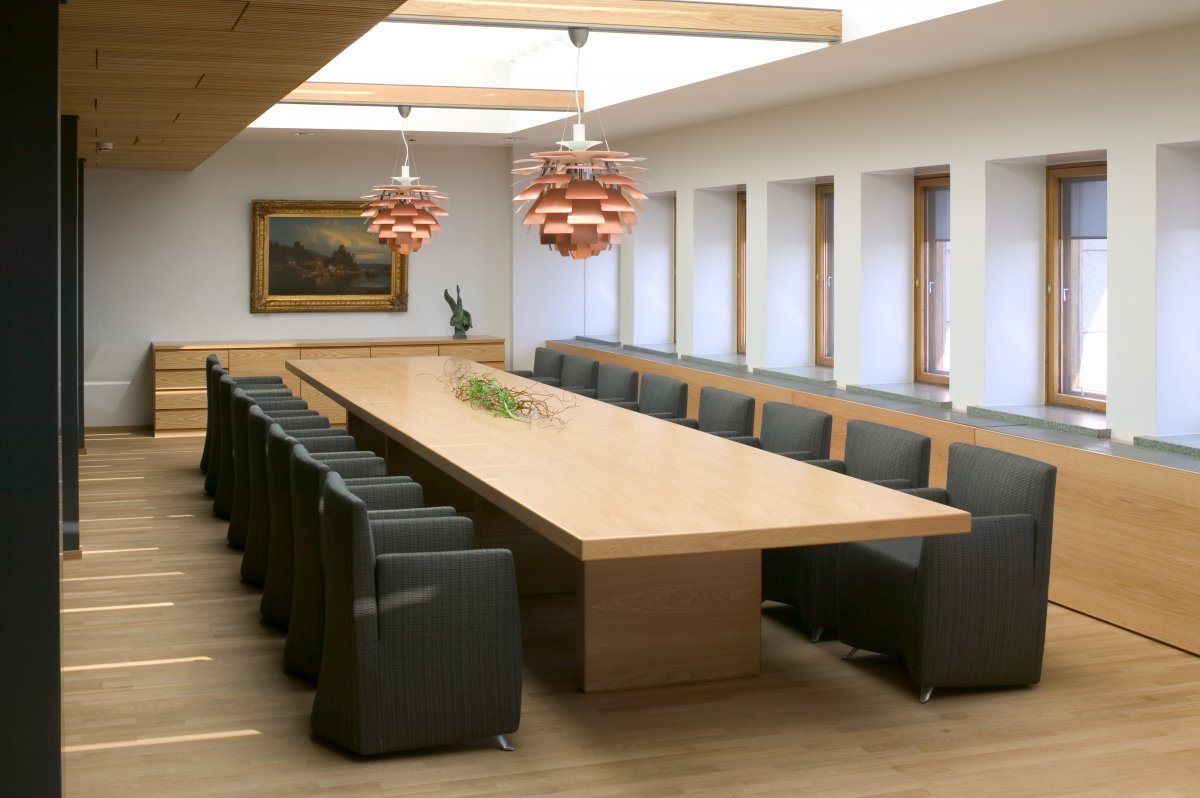 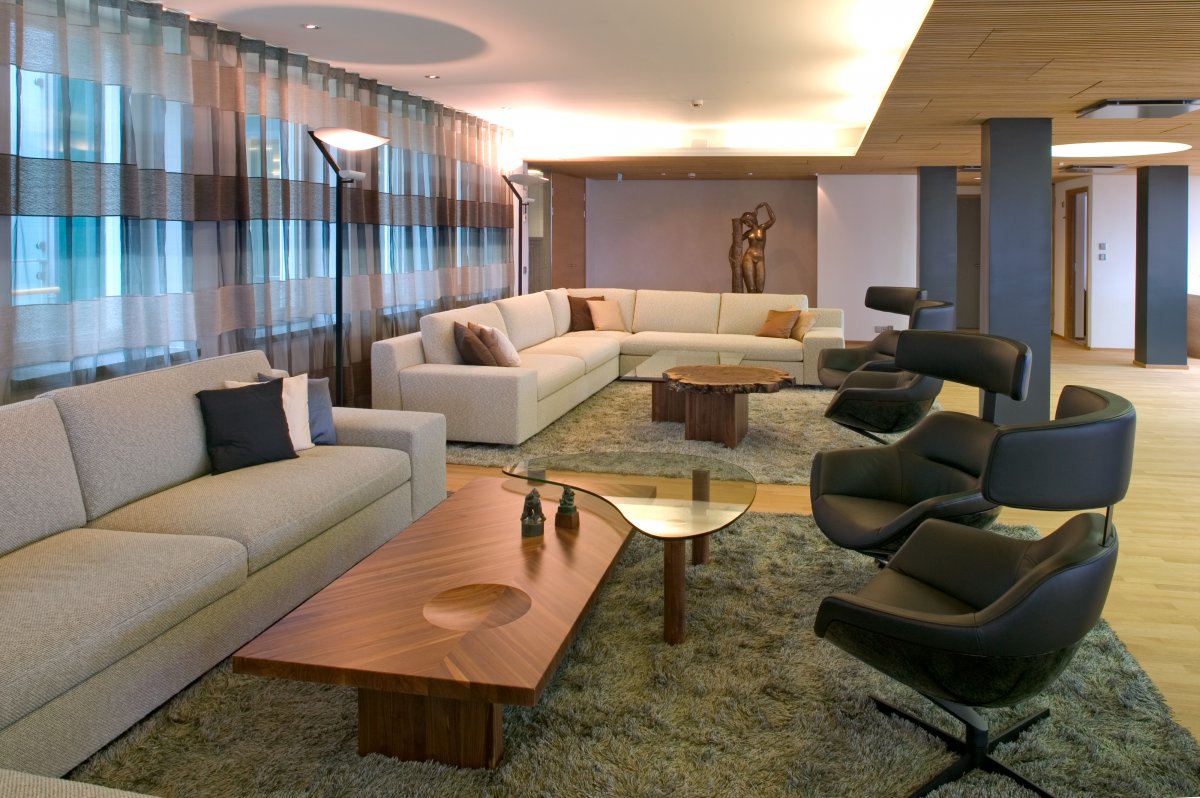