A perfect space… Helin & Co Architects designed a staff restaurant for Metsä Group and Mela in Tapiola, Espoo, giving prominence to the aesthetics and functionality of its wooden structures. Their sculpturality is accentuated by light coming in from between the curving beams.

Clad with exposed-aggregate panels in the typical manner of its time, the old three-volume office complex of the Metsätapiola real estate company had stood in south-eastern Tapiola in Espoo near the Länsiväylä thoroughfare from 1974. In summer 2009 the Metsäliitto co-operative, owner of the property, initiated a project for the renovation of the complex, covering the design and completion of a new office building as well as the renovation of the highest, eight-storey volume, especially as regards its facades and ground-floor spaces. The lower volumes were demolished and their part of the site was parcelled out for residential construction.

Tapiola is traditionally marked by a humane dialogue between architecture and nature. As an abstract metaphor of a birch forest, the facades of the new building were articulated by vertical sections bent in varying angles. This produces many variations in the interiors, spatial rhythms and views opening towards the sea.

Clerical work mainly takes place in open areas. Along with them, the needs of a modern, fluctuating work community are addressed by teamwork rooms, meeting rooms and rendezvous points. Daylight as an energy saving factor was given special attention. The open areas were grouped to face the sea, while the separate rooms were located to the courtyard side. Wood is an essential material in the office areas and meeting rooms as well as the exposed parts of furnishings. The new and old office spaces are connected by a one-storey-high restaurant-cum-function room, whose architecture is based on the top products of Metsäliitto’s own industrial businesses. The aim was to achieve a pillar-free space functionally as flexible as possible. The main supports are trestle structures with pillar elements of milled laminated wood and double beams of glulam wood. The interspace of each double beam has a window opening, the blank secondary sections are heat insulated wooden stressed skin panels. These components were all but finished when brought to site.

When the building was already in use, it appeared that there was a need for an auditorium bigger than the original one. Its design started in early 2015. The site had scanty area for additional building, but the solution was found in a broad fan-shaped room with sloping floor. The structures are mainly wood. The roof consists of stressed skin panels supported by one glulam principal beam and exterior walls. The wooden battening of the exterior cladding joins the facade to the function room of the main building that was completed earlier.

The most dazzling spatial experience, however, is the restaurant that is spacious and high, vault-like in a new way… laminated wood bends over the walls as a stunning frame, at once very firm and skilfully supple… A primal Finnish equivalent to the Classical Orders seems to have been found by going to the forest.

In the design of the new part, much was invested in environmental issues and energy efficiency. The technical installations and lighting were integrated into a part of the multiform interior architecture. The rooms are heated and cooled by means of panels installed in the ceilings, which makes indoor conditions pleasant through the year. The system utilises cost-free energy very efficiently. 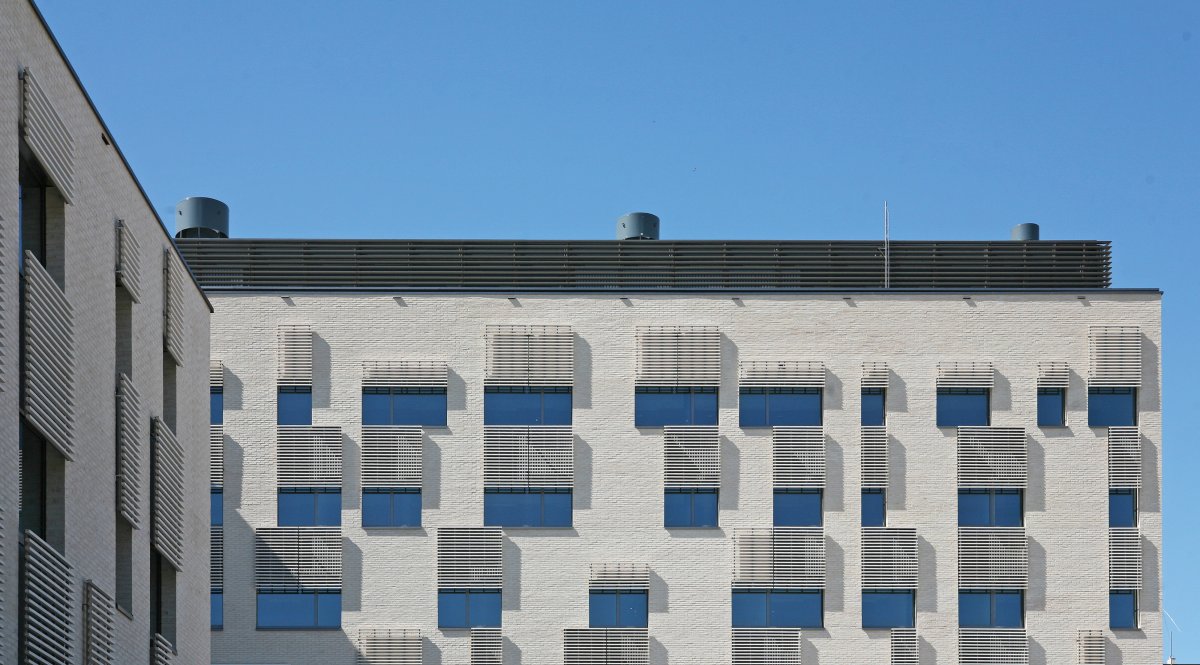 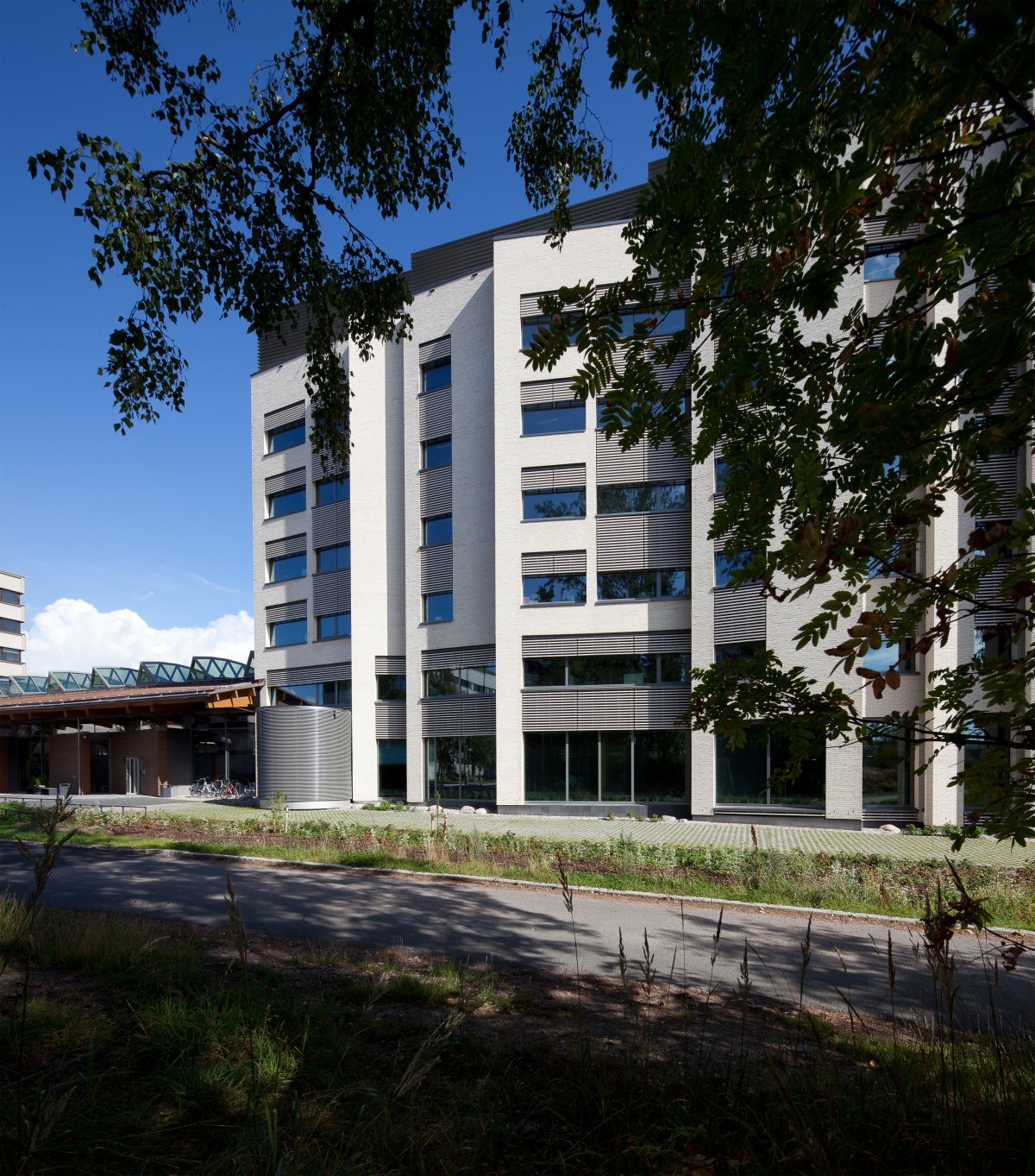 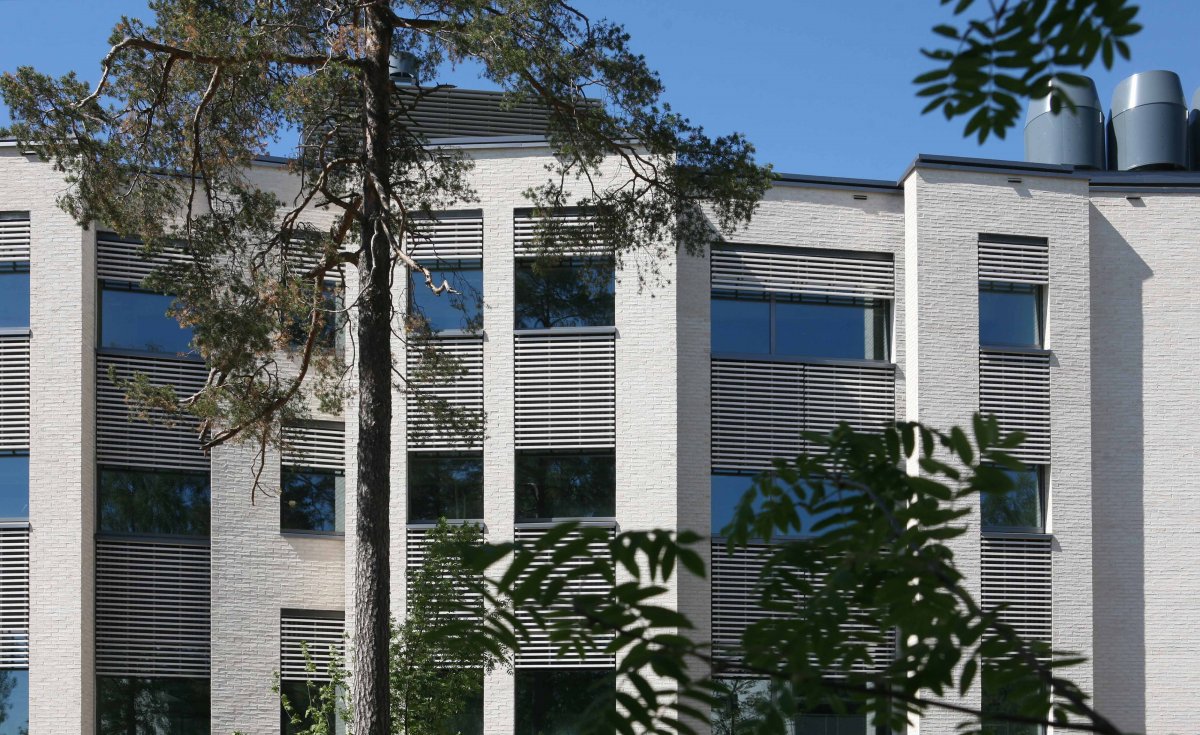 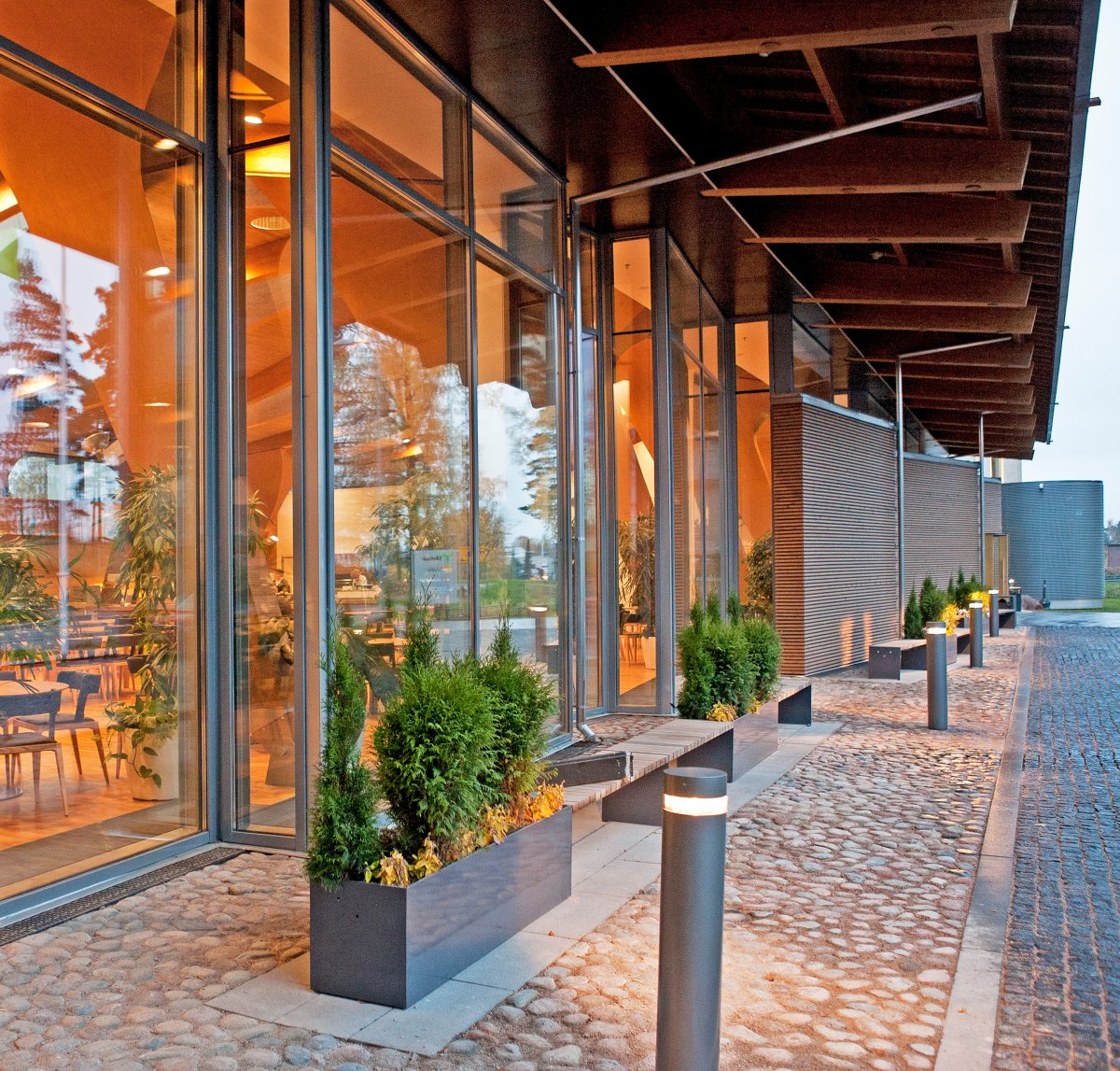 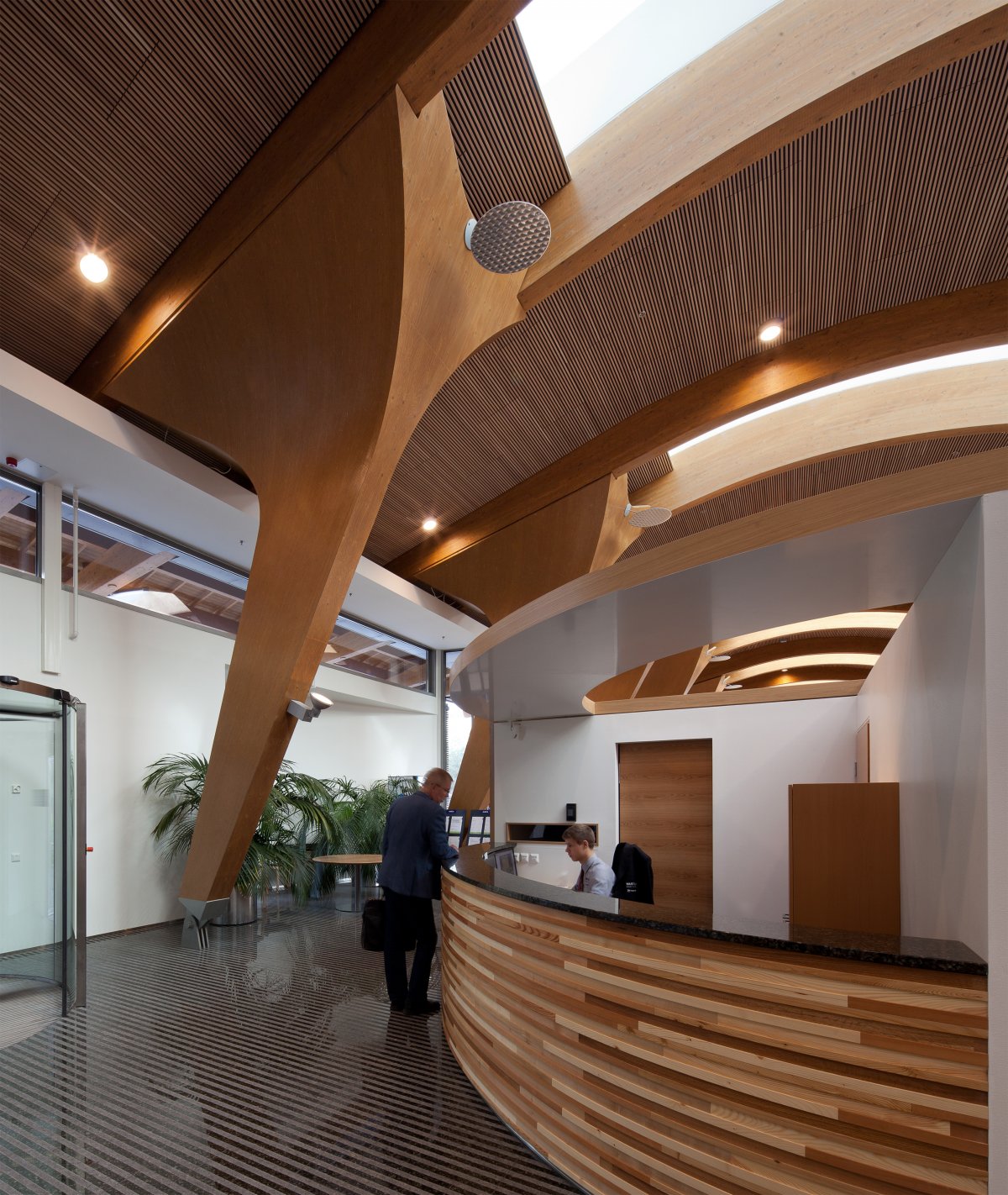 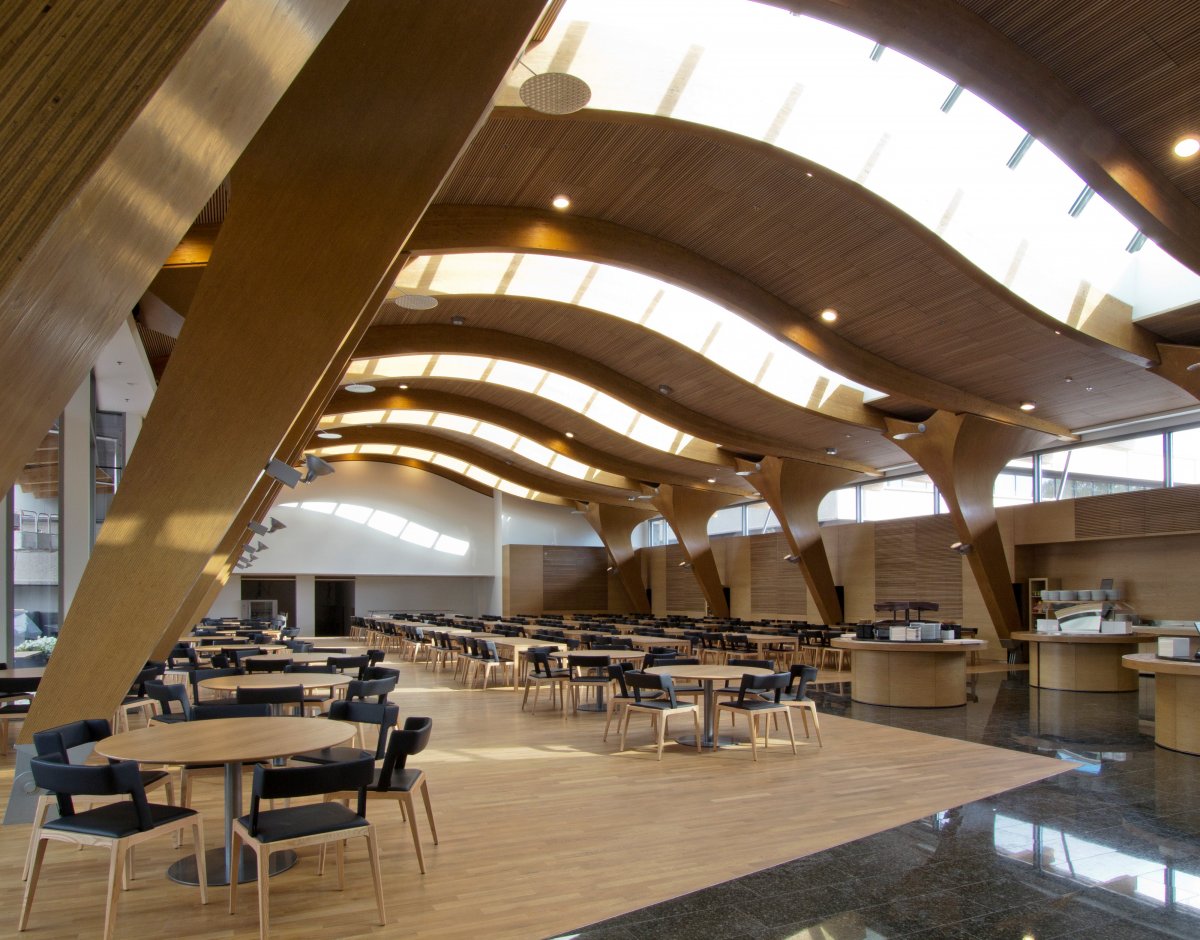 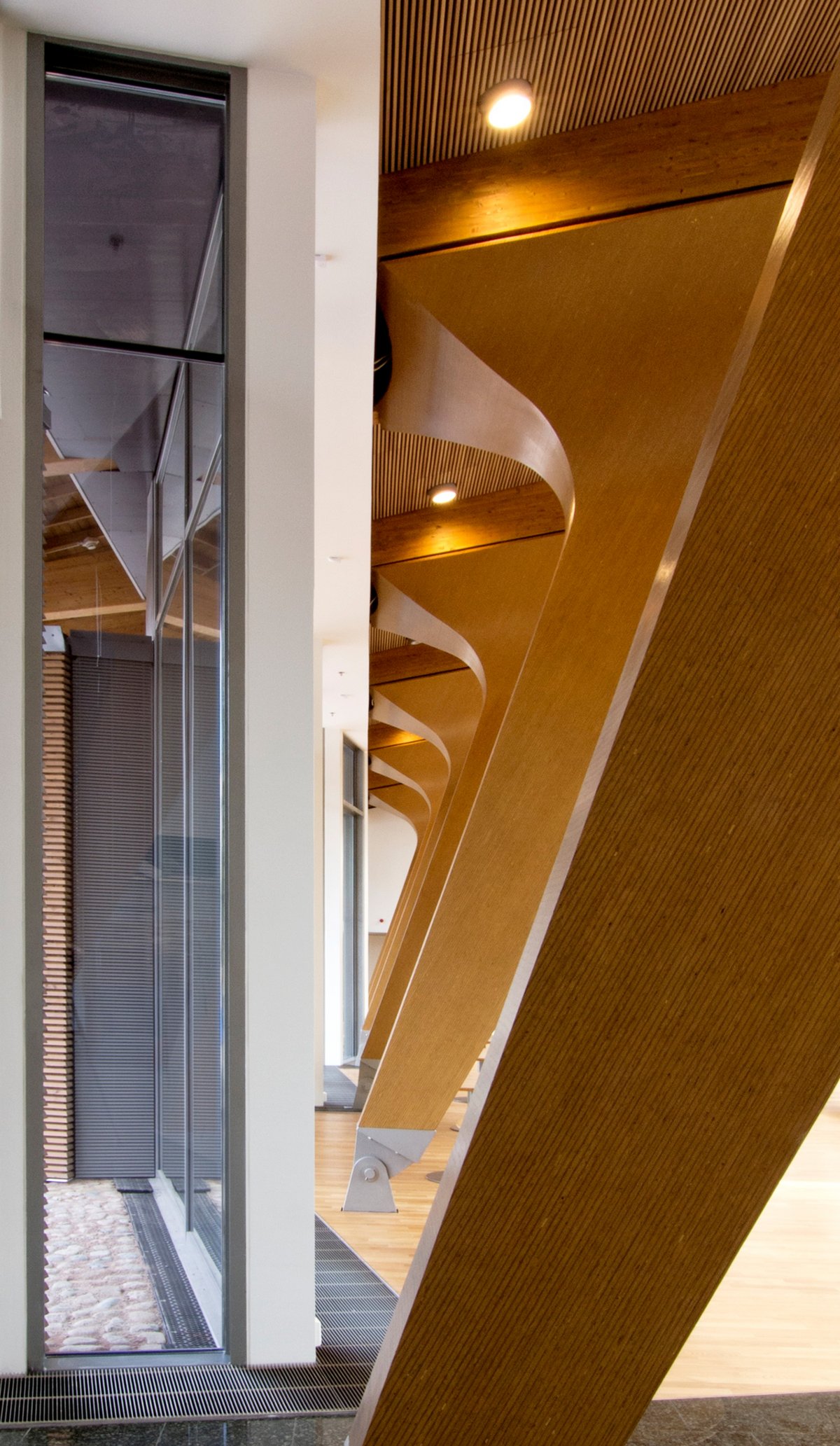 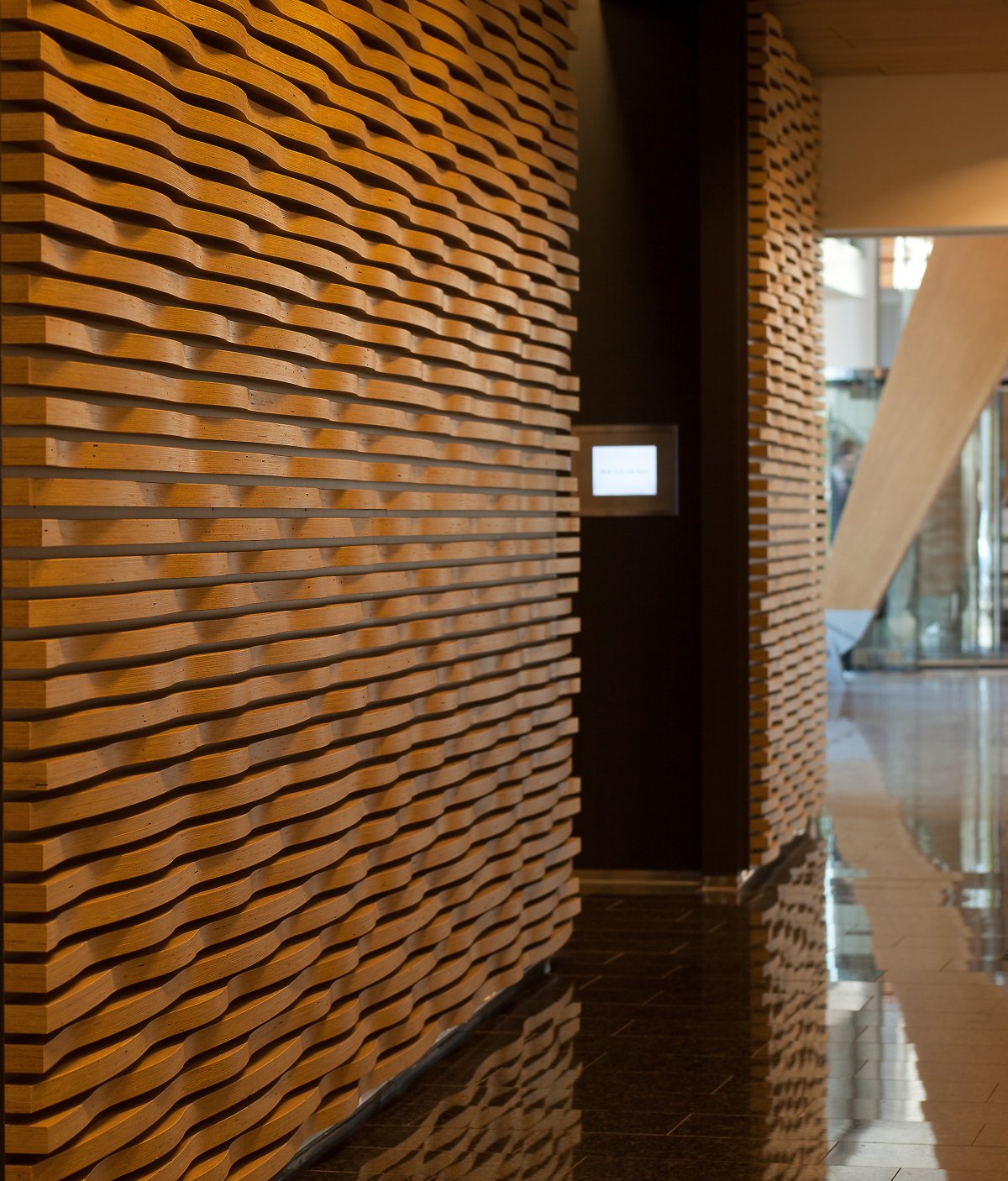 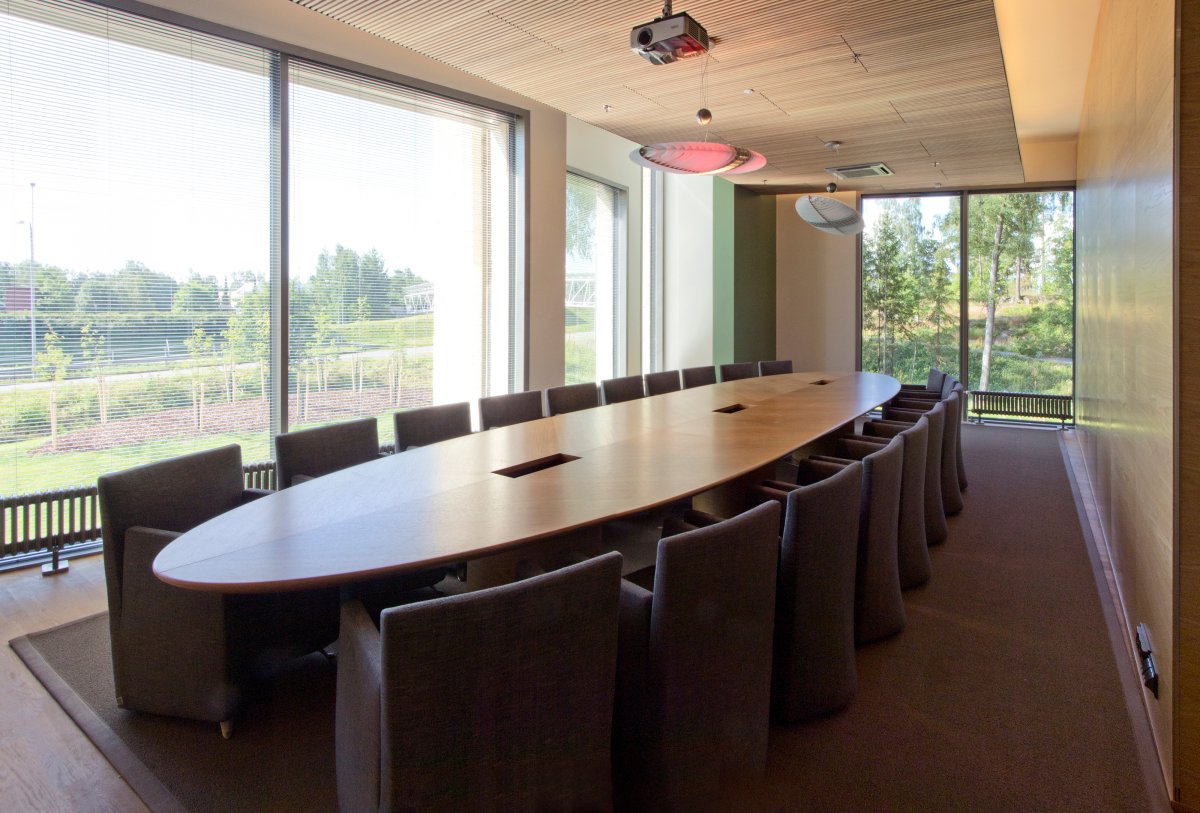 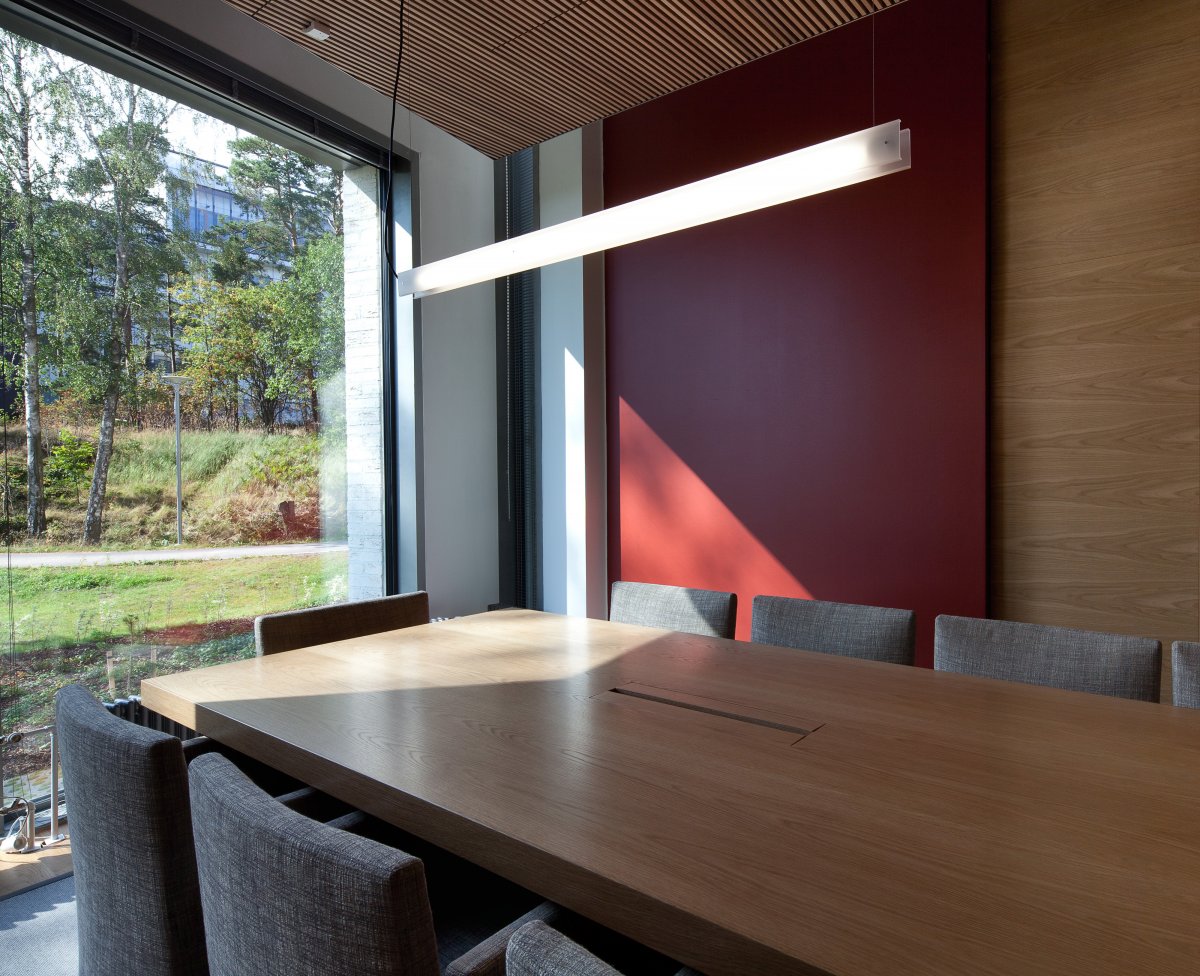 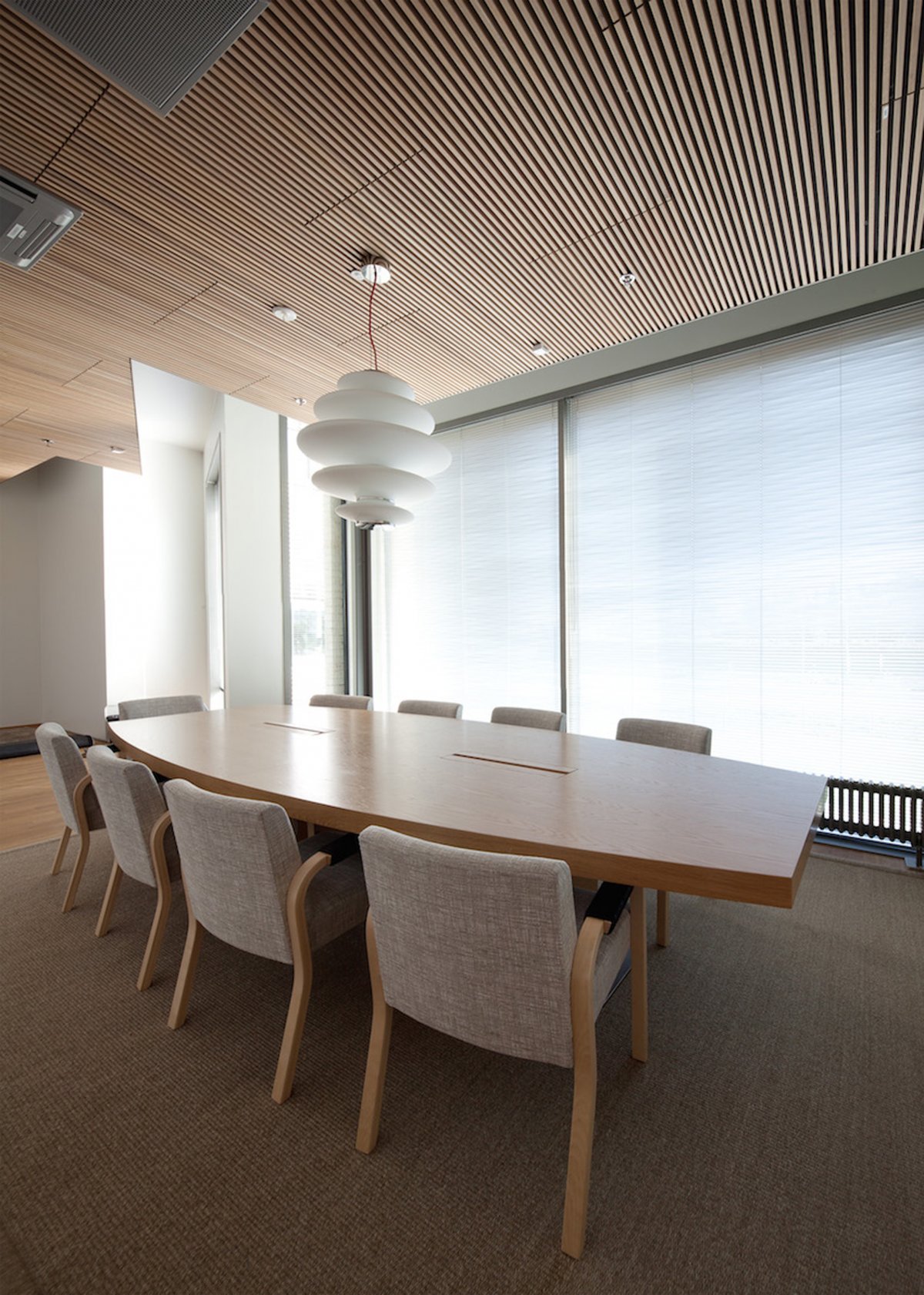 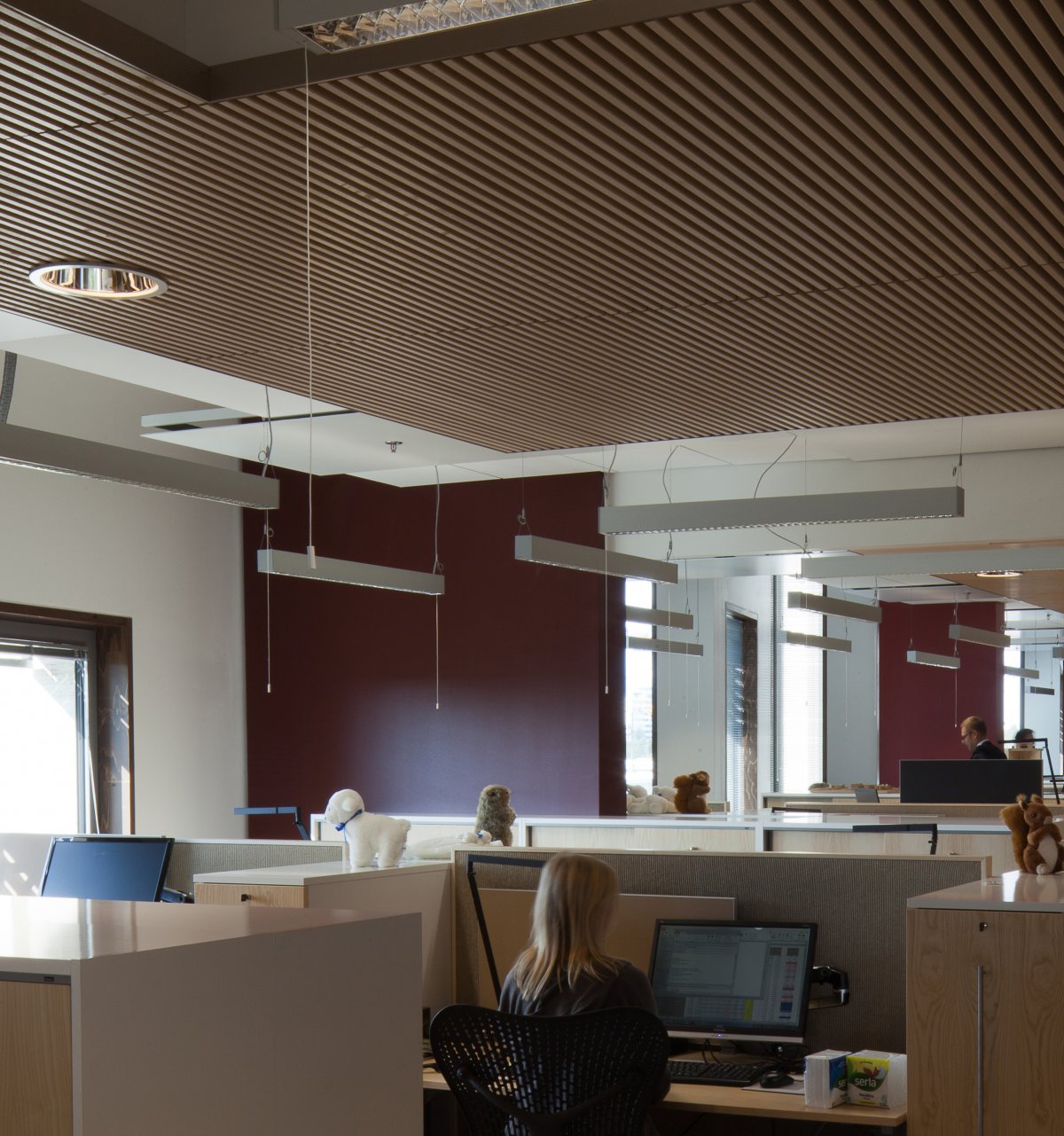