The metro project started in Helsinki in 1955, when a city council member moved that a metro be built. Because of rapid growth of population it was assumed that the street network would not have enough capacity to accommodate both private cars and public transport. Moving public transport underground was seen as a solution to the problem. The decision concerning the first phase construction was finally made in 1969, and regular traffic between Helsinki railway station and Itäkeskus (‘eastern centre’) began in August 1982. Gradually the metro line was extended both eastwards, where it reached Mellunmäki in 1989 and Vuosaari nine years later, and westwards, where the Ruoholahti stration was opened in 1993. Discussion about extending the metro line westwards to Espoo started in the late 1990s.

When the western metro project was launched in 2009, Helsinki’s traffic policy was no longer defined by the needs of private motoring. According to the website of the City of Helsinki, a traffic system required by dense urban structure remains functional, when more and more journeys are made using effective and space-saving modes of travelling: on foot, by bicycle and by public transport. The city’s climate targets also support the current principles of traffic planning.

Traffic on the Ruoholahti–Matinkylä line started in November 2017. The stations on the line are functionally similar. On the platform level they are parallel to the track, 90 metres long, and at each end there are escalators and lifts for passengers to ascend to ground level. However, the objective was to achieve idiosyncratic stations that are distinctive from each other. That is why each station was given a specific, characteristic theme at the beginning of the design phase.

The Lauttasaari station has two entrances. The entrance hall at the eastern end is located at a street corner beside a shopping mall. It is dominated by a glass cylinder, inside which a slanting lift and an escalator dive under the crossroads into the platform area. The cylinder is supported by a concrete mushroom column, which can be seen as a reminiscence of the old concrete water tower that was the landmark of Lauttasaari. In the western entrance hall the structures of the curved ceiling and walls are exposed. Made of light treated bent glulam wood, they compose a continuous column and beam construction. The roof extends all the way to the ground on the street side. The other exterior walls are mainly glass. The roof is covered with pre-patinated zinc sheet. Slate, a material typical of the 1950s, is used in a modern way, split and laid in horizontal position. The courtyard paving and massive stone walls are gabbro. The colours of the materials were chosen to suit the 1950s palette of Lauttasaari. The station features a light installation. 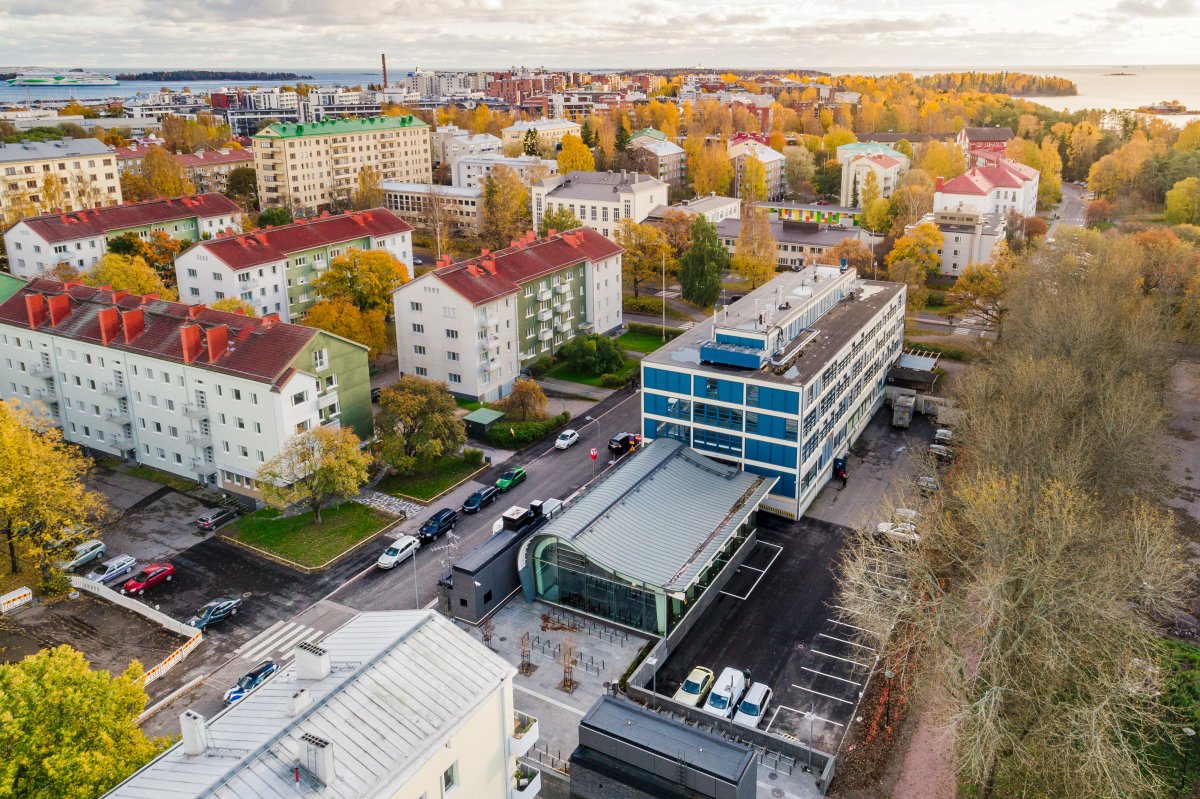 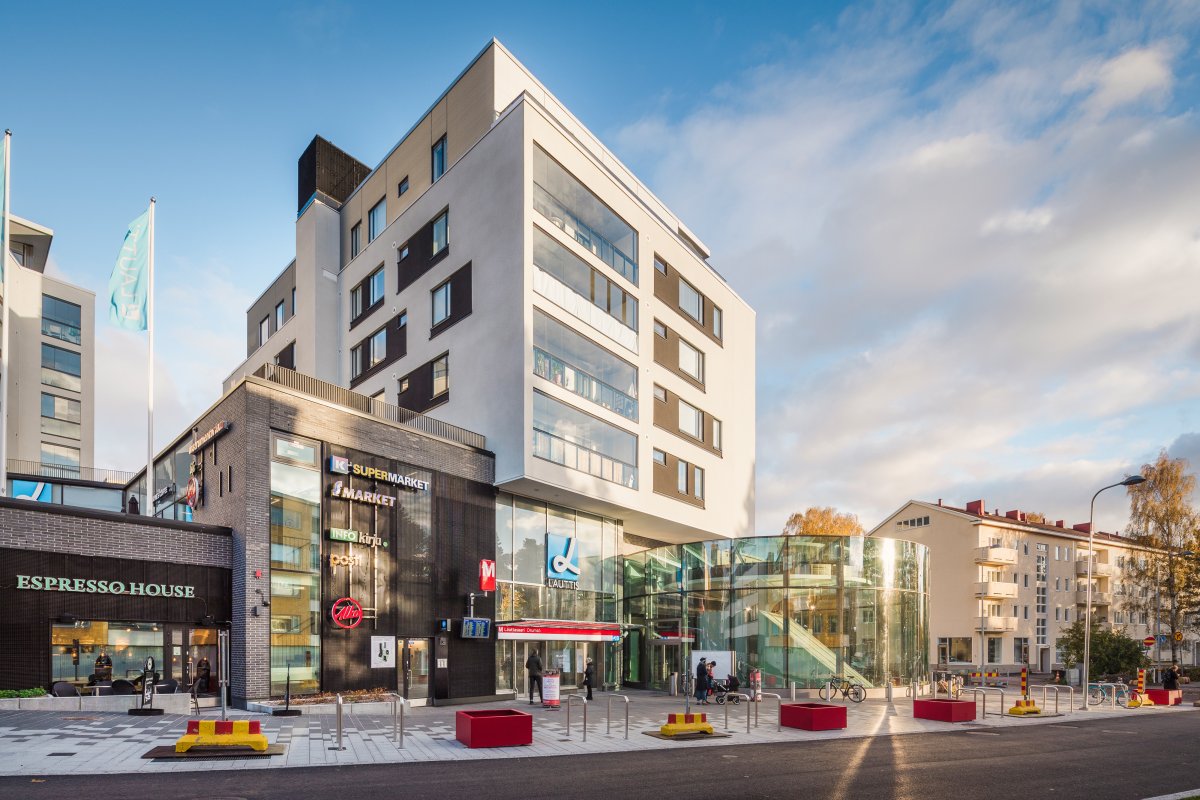 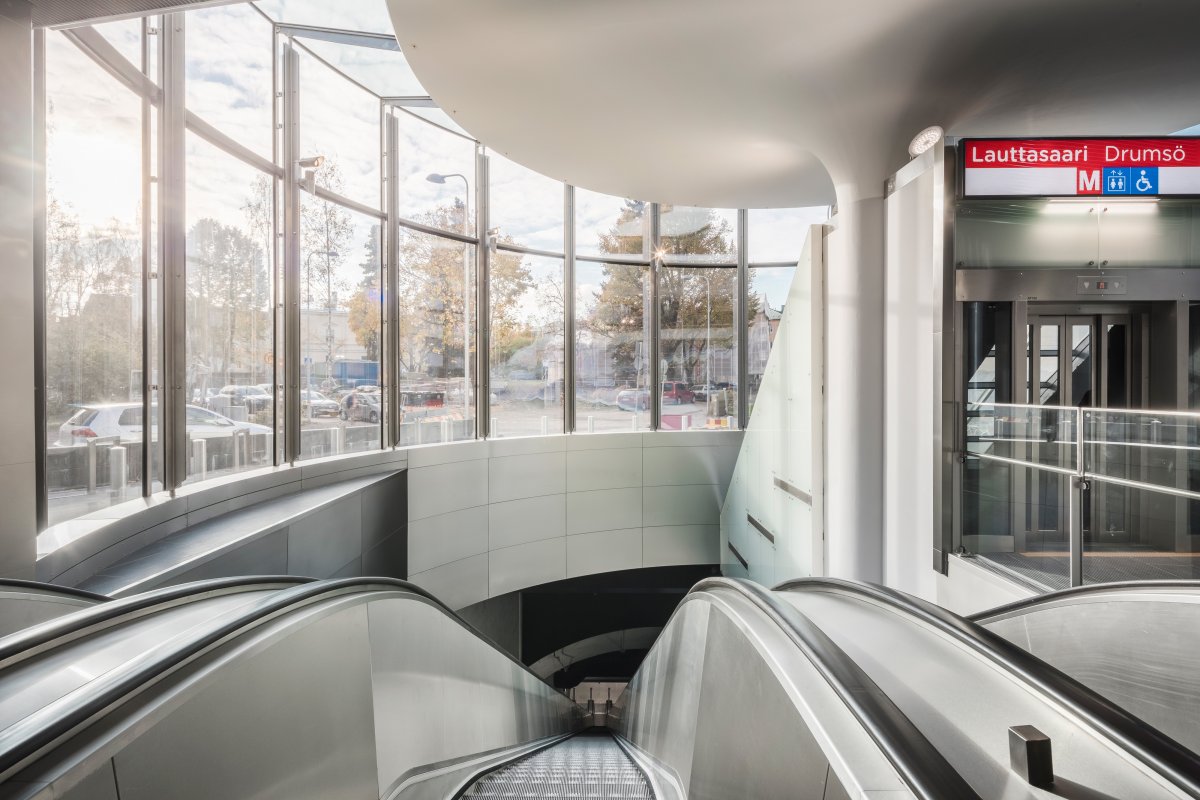 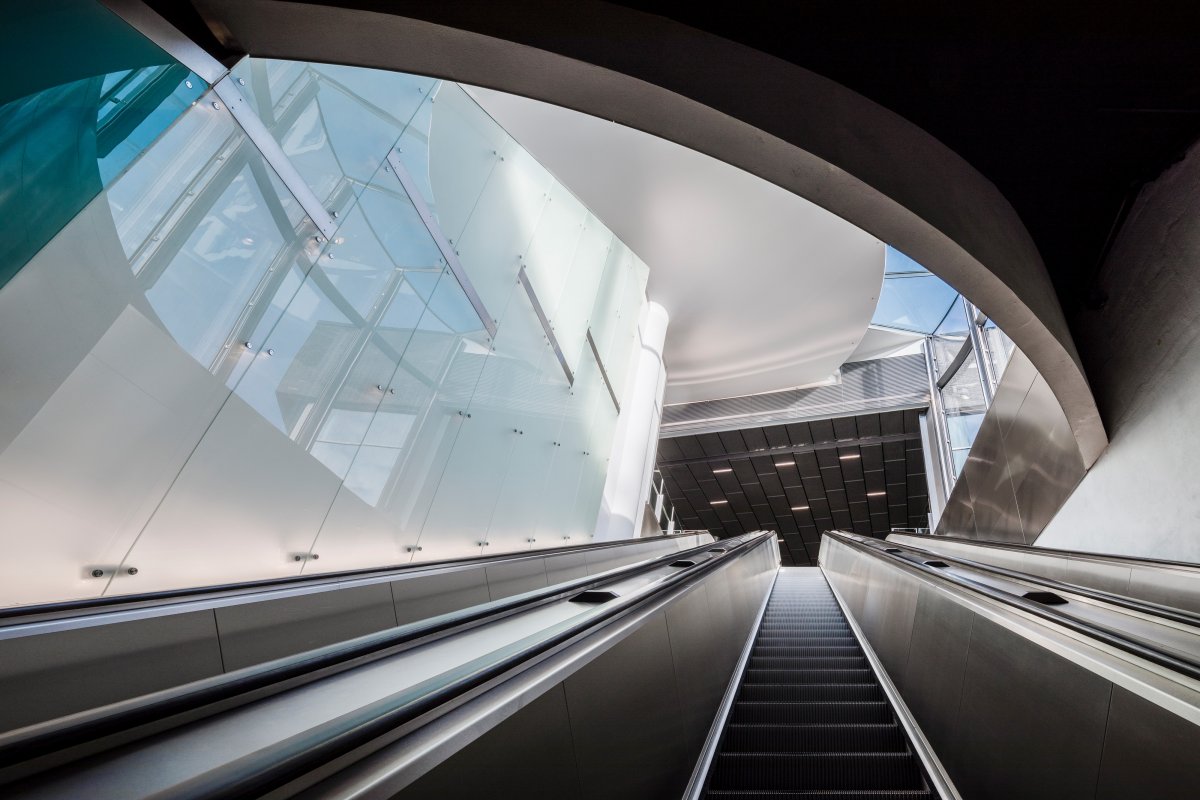 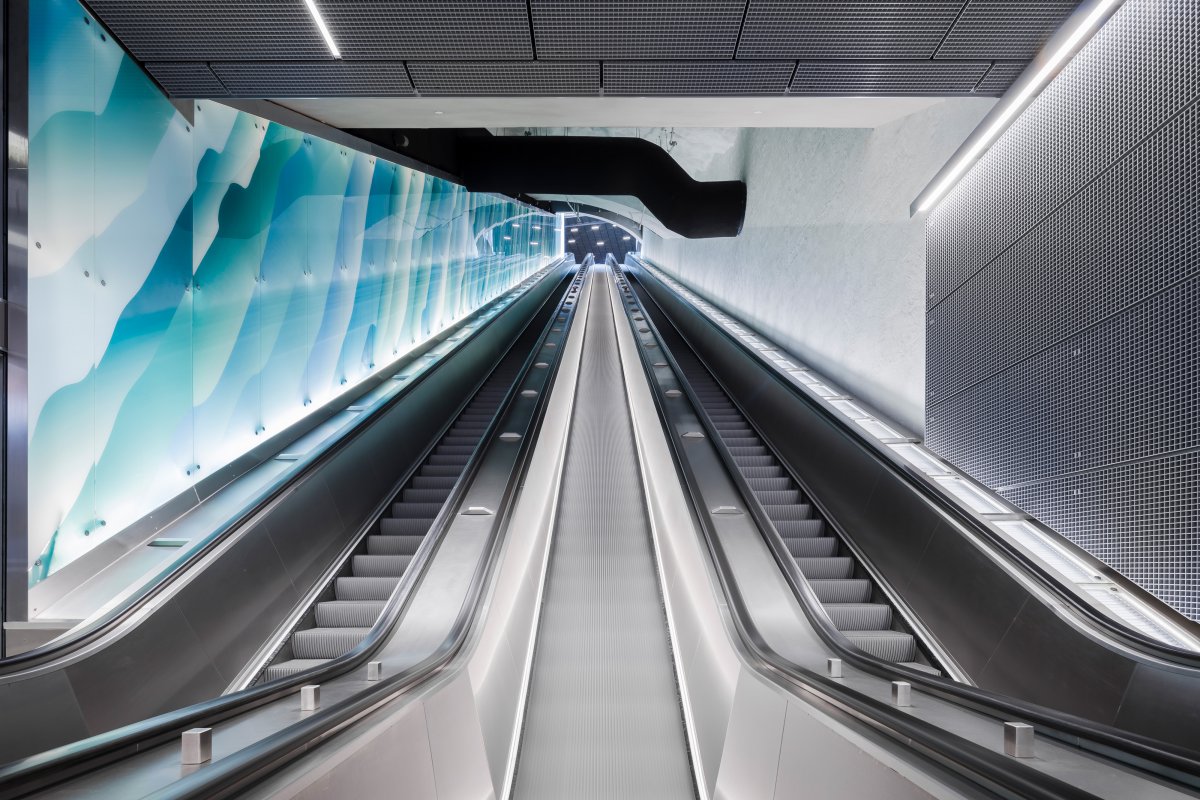 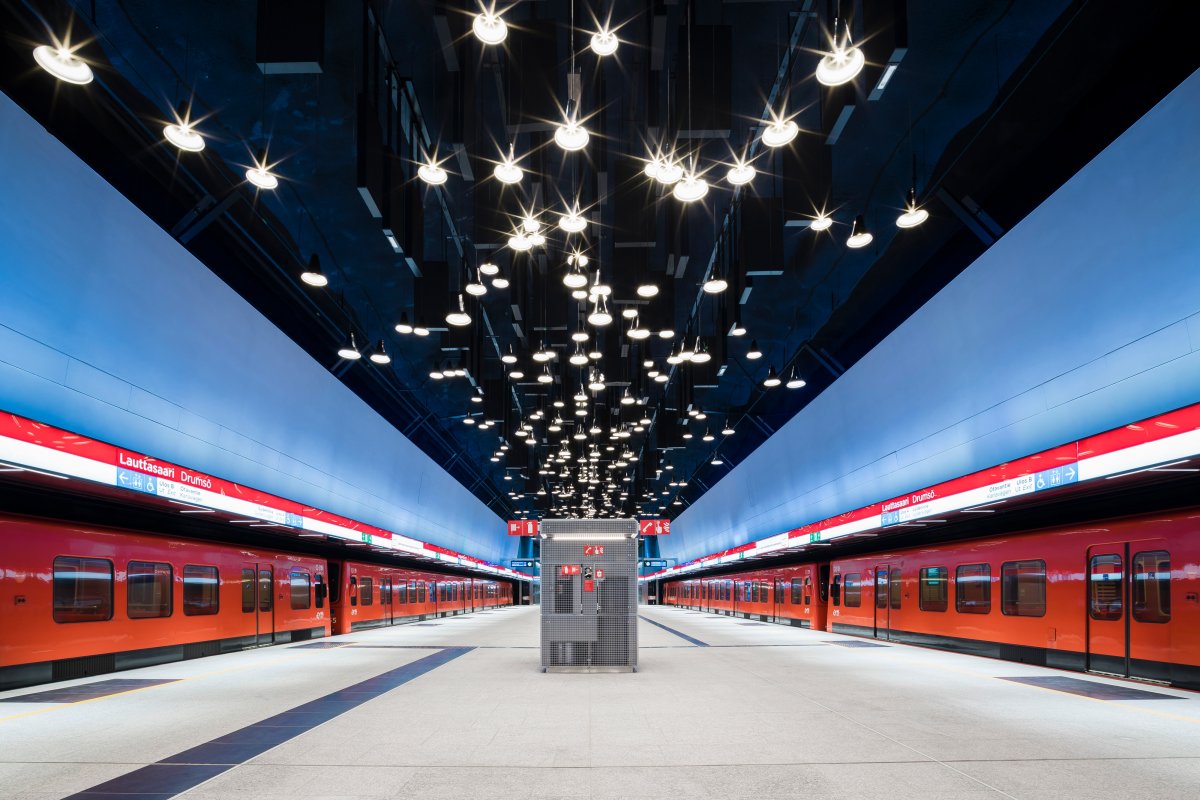