The metro project started in Helsinki in 1955, when a city council member moved that a metro be built. Because of rapid growth of population it was assumed that the street network would not have enough capacity to accommodate both private cars and public transport. Moving public transport underground was seen as a solution to the problem. The decision concerning the first phase construction was finally made in 1969, and regular traffic between Helsinki railway station and Itäkeskus (‘eastern centre’) began in August 1982. Gradually the metro line was extended both eastwards, where it reached Mellunmäki in 1989 and Vuosaari nine years later, and westwards, where the Ruoholahti stration was opened in 1993. Discussion about extending the metro line westwards to Espoo started in the late 1990s.

When the western metro project was launched in 2009, Helsinki’s traffic policy was no longer defined by the needs of private motoring. According to the website of the City of Helsinki, a traffic system required by dense urban structure remains functional, when more and more journeys are made using effective and space-saving modes of travelling: on foot, by bicycle and by public transport. The city’s climate targets also support the current principles of traffic planning.

Traffic on the Ruoholahti–Matinkylä line started in November 2017. The stations on the line are functionally similar. On the platform level they are parallel to the track, 90 metres long, and at each end there are escalators and lifts for passengers to ascend to ground level. However, the objective was to achieve idiosyncratic stations that are distinctive from each other. That is why each station was given a specific, characteristic theme at the beginning of the design phase.

The free-form roof of the Koivusaari station compares with an upside down wooden vessel. The principal exterior cladding materials are acid-proof steel, patinated solid zinc sheet, glass and natural stone. The floor and walls of the main entrance are red granite, which is the most common stone of the shoreline rocks of the area. The exposed roof beams are wood structures, and the roof is supported by a massive primary beam with a curve at one end. The upper parts of the long side walls of the platform are composed of spotlighted wave-like “baleens”, which have both an atmospheric and an acoustic function. The ceiling is asymmetric in every direction, and a work of art reflecting the sea is planned there. The flooring of the platform is on-site cast, polished concrete mosaic. Koivusaari is the only undersea metro station in the world and its escalator is the longest in Finland. The platform is under the Vaskilahti bay at level –30.00.

The wave patterns in the skilfully illuminated glass wall create a strong marine feel. When you turn your gaze standing on the escalator, you find a contrast in the red Mäntsälä granite glowing dimly on the opposite wall… The marine feel continues when you come to the platform level… The huge white ‘baleens’ installed over the tracks and the dark ceiling create an atmosphere of an underwater world.

This is the most beautiful metro station in the world.

Reima Liikamaa, site manager on the site of the Koivusaari station, in the above article. 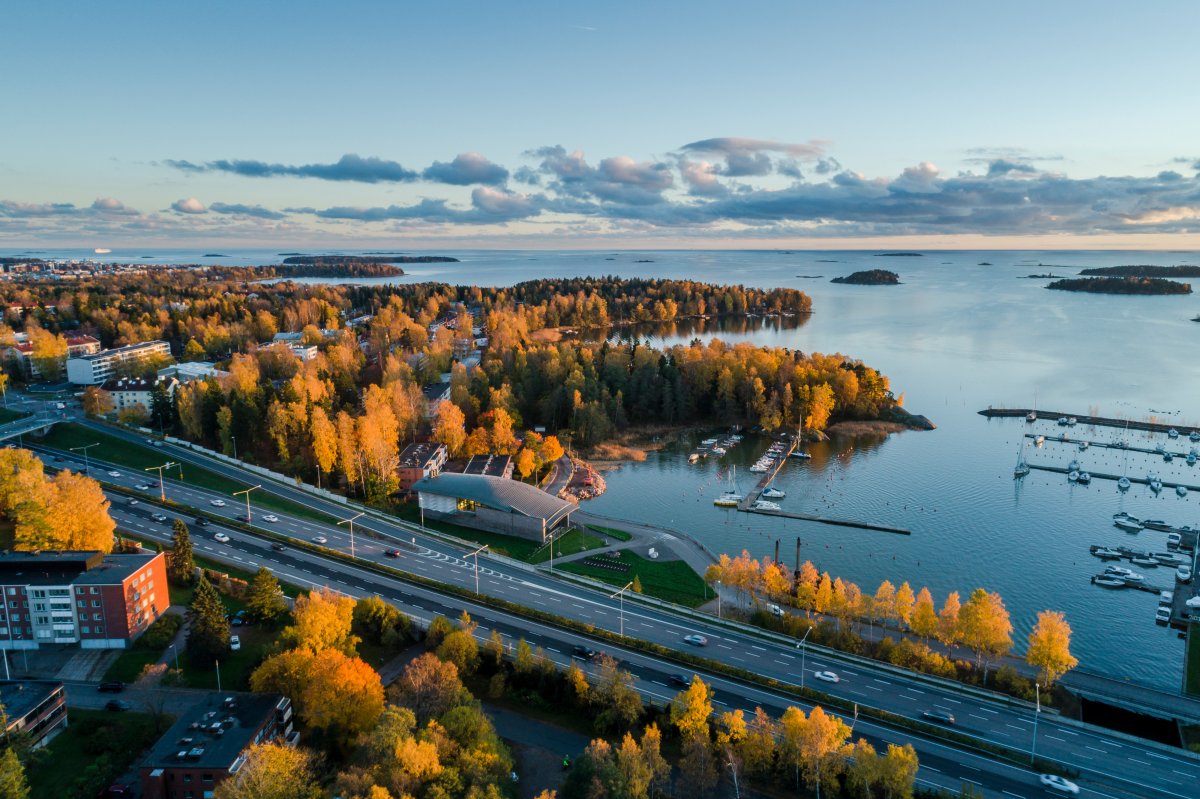 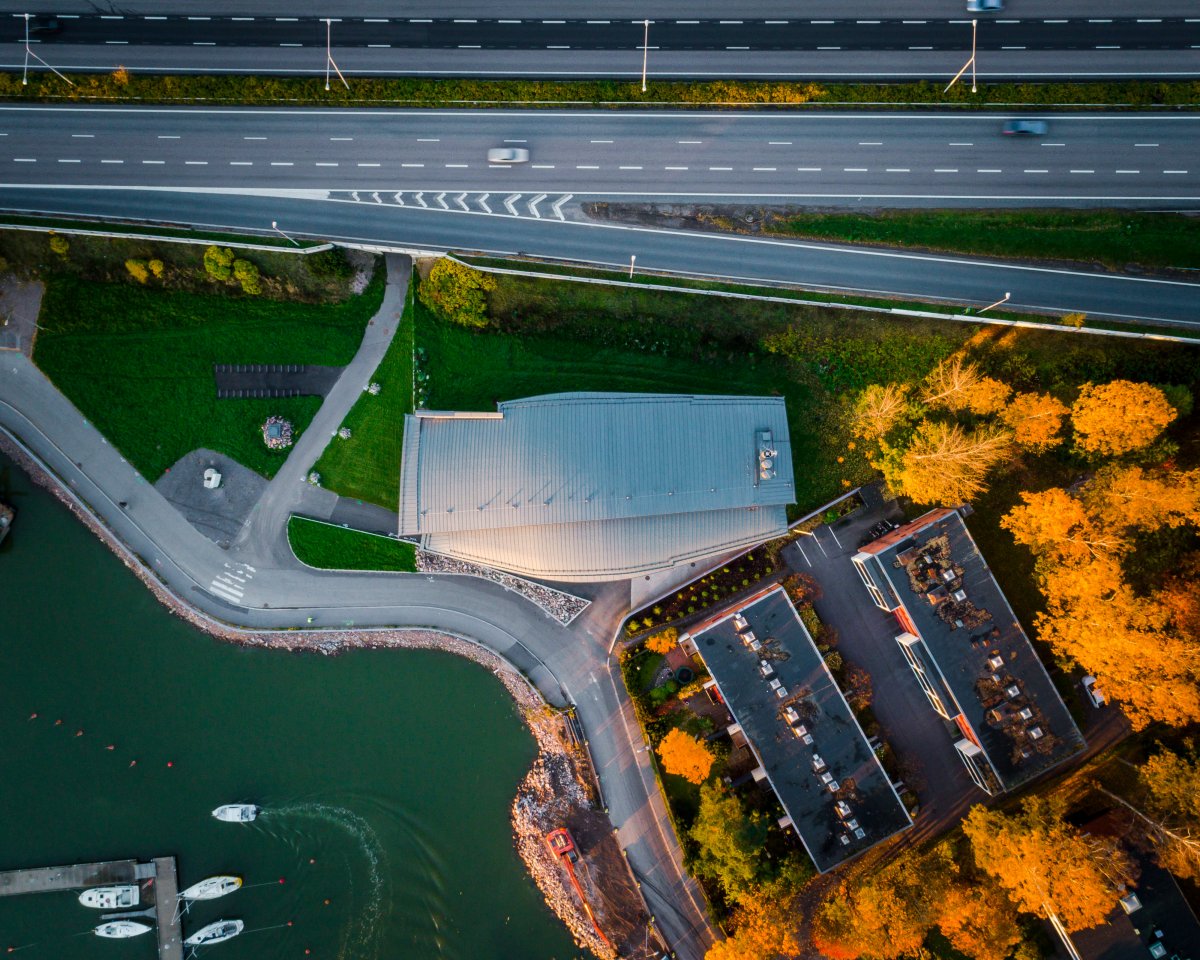 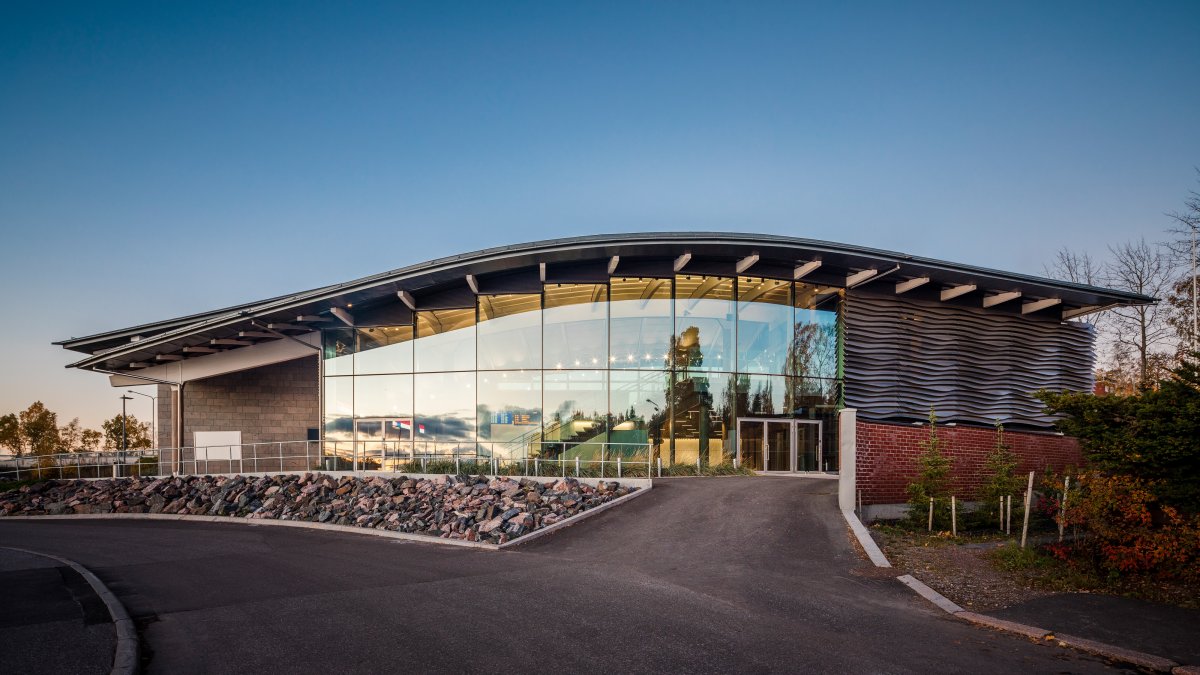 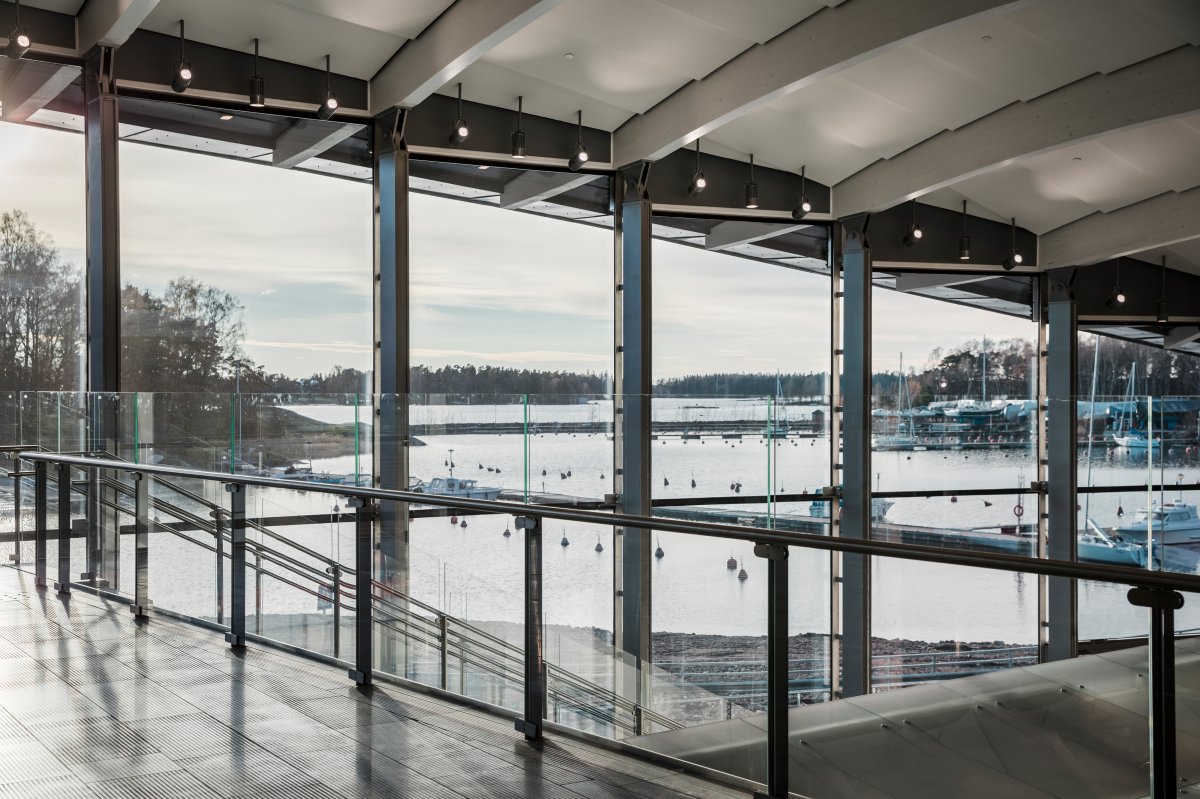 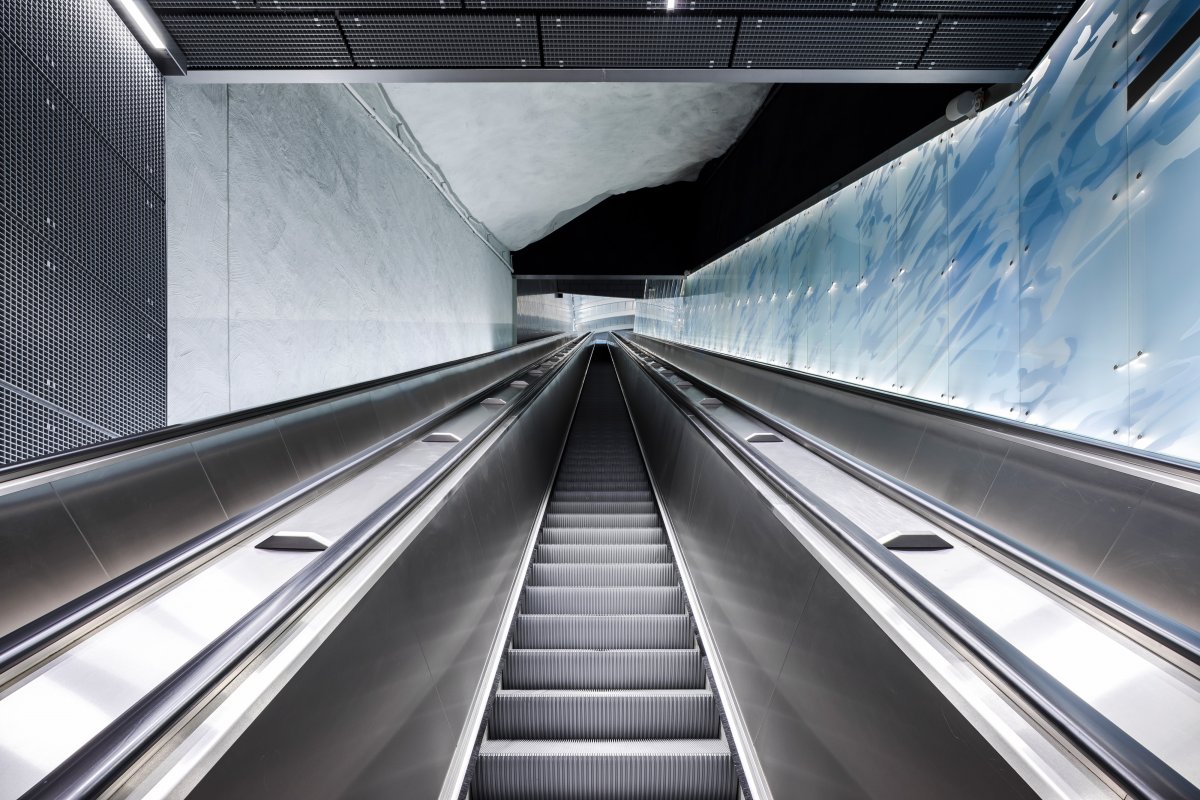 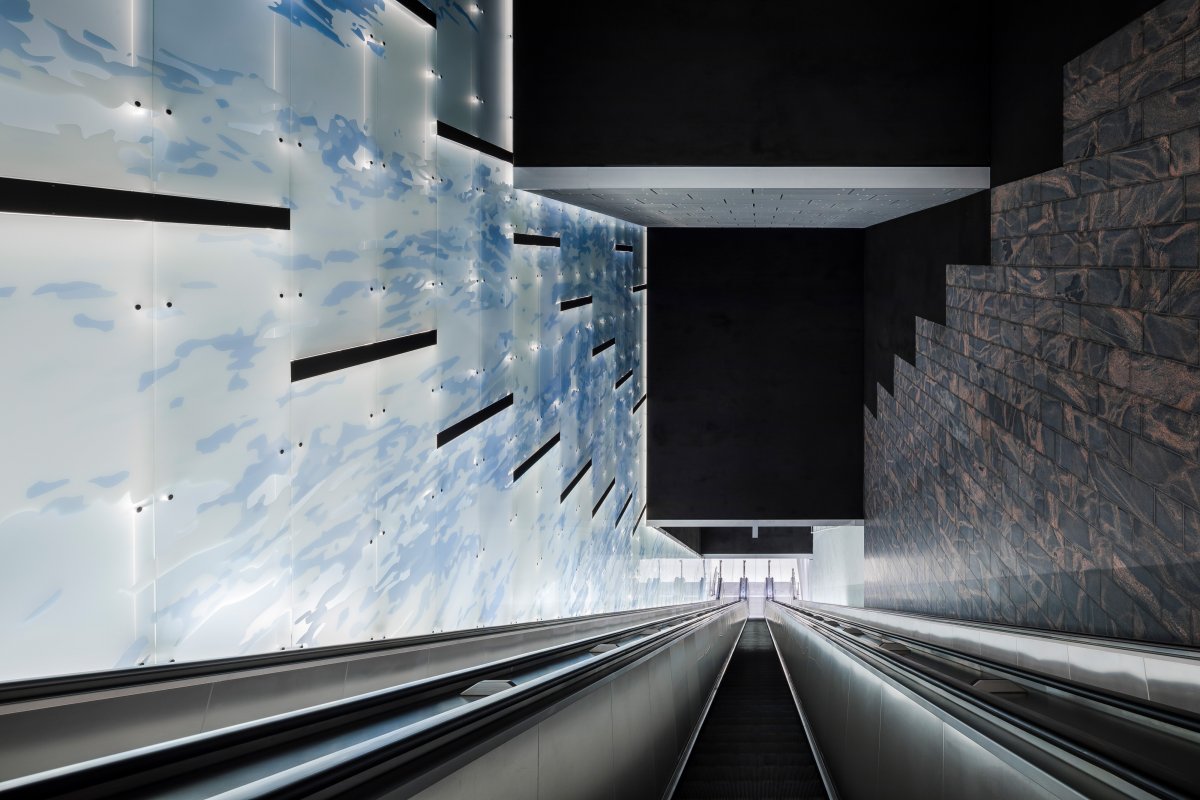 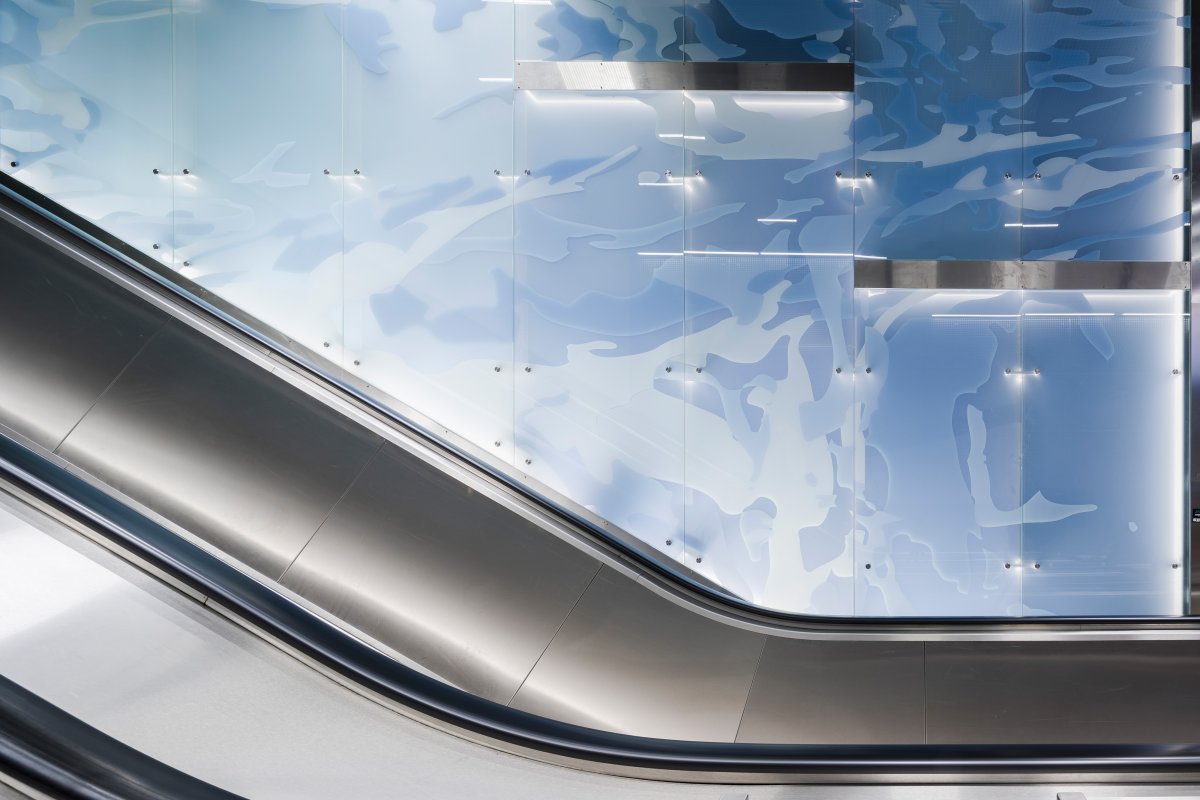