There is something particularly Scandinavian in the informality, direct contact with wild nature, and in the multiplicity of varied opportunities for social contact.

In the language of metal, murikka means an unworked piece of metal, but the building Murikka is unique, a refined sample of the architecture of the 1970s. Built in 1977, it blends in imperceptibly and beautifully with the surrounding nature. Nature presents itself in all seasons even indoors through the large windows.

The design of Murikka, made in collaboration by Pekka Helin and Tuomo Siitonen, is based on the winning entry of an open architectural competition organised in 1974 for the training centre of Finnish Metal Workers’ Union. Situated in Teisko, Tampere, the present-day Murikka Insitute is an adult education centre, whose mission is to maintain and develop the Finnish contract society in the field of working life by providing education to that end.

The Metal Workers’ Union, established in 1899 (from 2017 the Finnish Industrial Union) is the largest industrial trade union in Finland and the education centre is the symbol of the joint efforts of its members. The architecture was intended to highlight the skills of the users in both structural solutions and material choices, from facade cladding through to details.

The scale and composition of the building were influenced by its location on a peninsula with a rocky shoreline extending into Lake Näsijärvi and the given functional requirements. These led to low-rise construction and to dividing the large overall volume into small parts. The main building contains a spacious entrance lobby, restaurant, auditorium seating 140, library and other learning spaces. Accommodation is in a roughly L-shaped building connected to the main building by a glass corridor and surrounding a central courtyard on its north-western and north-eastern side. It contains 104 guest rooms and communal areas in the turning points of the volume. A separate building, which forms the south-eastern border of the courtyard, houses sports facilities, a swimming pool and a gym for ball games with sauna.

The buildings are mainly constructed of prefabricated components. The pillars and beams of the main building and sports building are steel. The central part of the learning area has spatial trusses. Elsewhere in the main building lightweight concrete units and hollow-core slabs supported by a pillar-beam system composed of standard units form a “beamless” ceiling. This structure contributed to the initiation of a research commissioned by the lightweight concrete producer, concerning the application possibilities and further development of the type of structure. The copper panels of the facades were stiffened by deep-drawn grooves. Applying in a public building such prefabricated components that were mainly used in industrial buildings called for intensive collaboration between the structural engineer and the architect.

The dark tile floors of the building serve as a thermal mass, which absorbs the solar heat flowing in through the large windows and releases it to indoor air at night. Cooling was arranged by means of water from Lake Näsijärvi. Both systems reduced the need of fossil energy, though at that time the matter was not as topical as it is today.

The competition entry was based on rectangular coordinates throughout, but during the design phase Pekka Helin sketched a complex with courtyard winding organically along the terrain. In the realisation phase the main building returned to the principles of the competition phase, but it is connected to the swimming pool building by the stepped accommodation building that follows the topography of the site.

The education centre was recently renovated with respect for the original design. The standard of equipment was heightened and functionality was improved. At the same time terrestrial cooling and heating were put into service. “It is great to be involved in the renovation of an esteemed education and conference establishment and to make sure that everything new is done with high regard for the old”, said Juha Leppiniemi, managing director of Murikanranta Oy, the company in charge of the restaurant, conference and accommodation services in Murikka. (Aamulehti 11th December 2015) 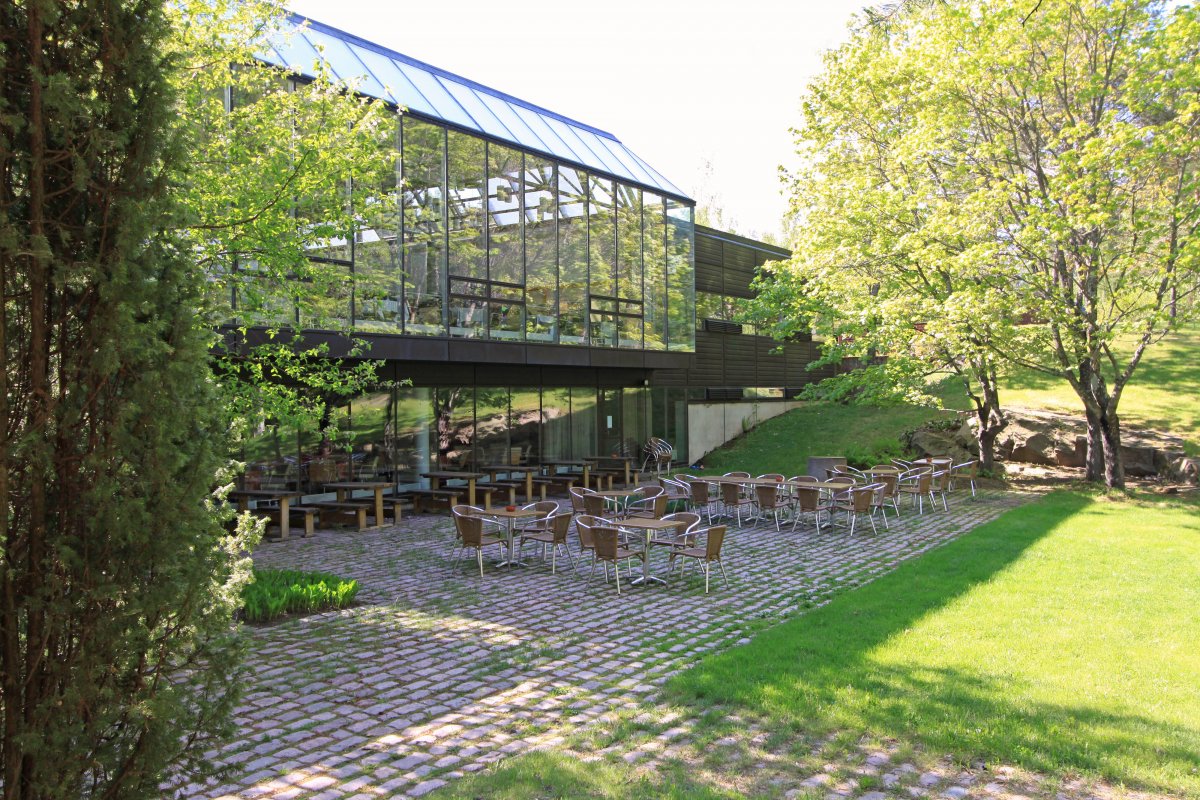 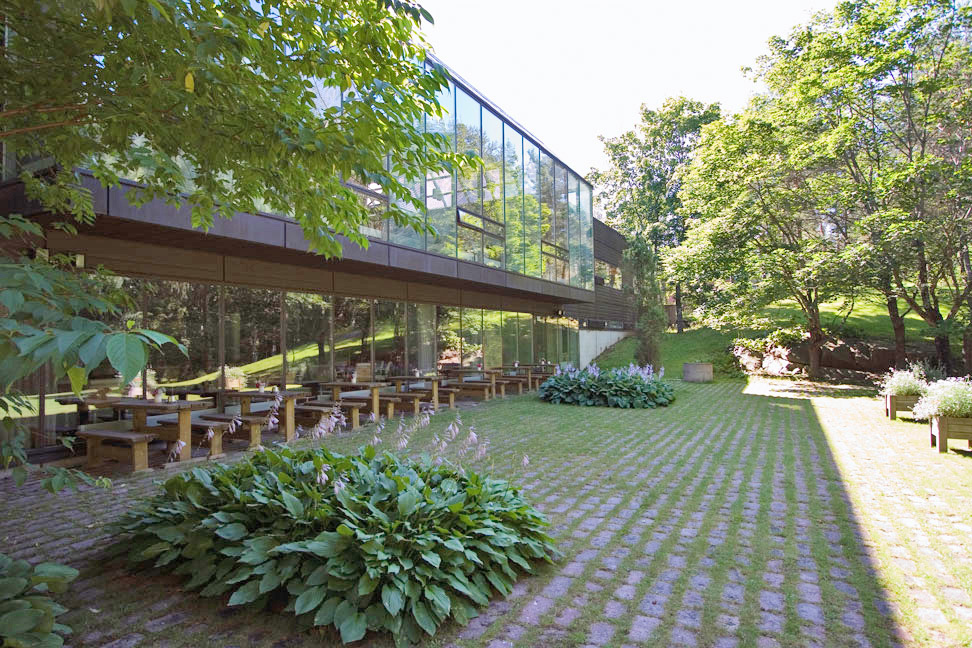 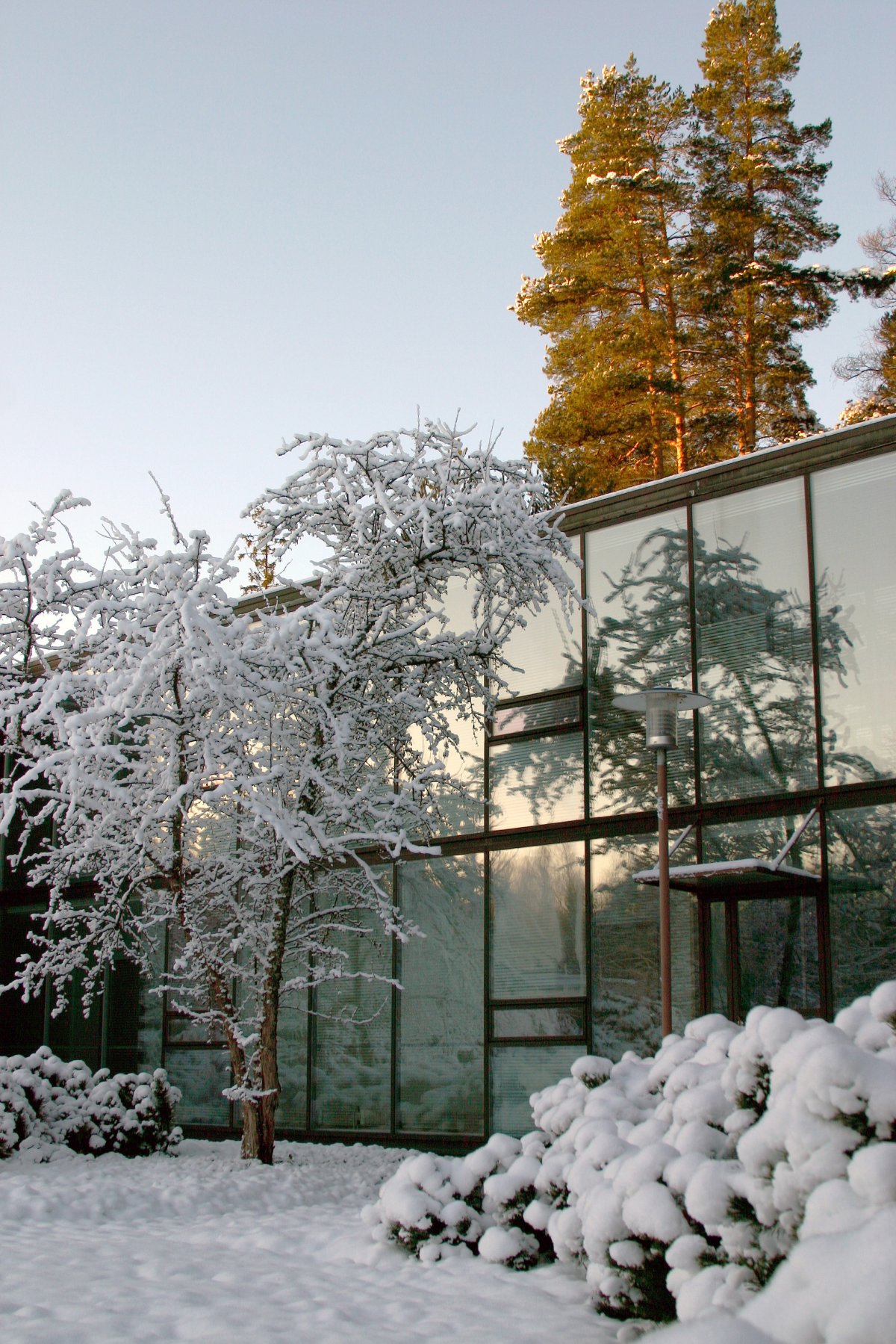 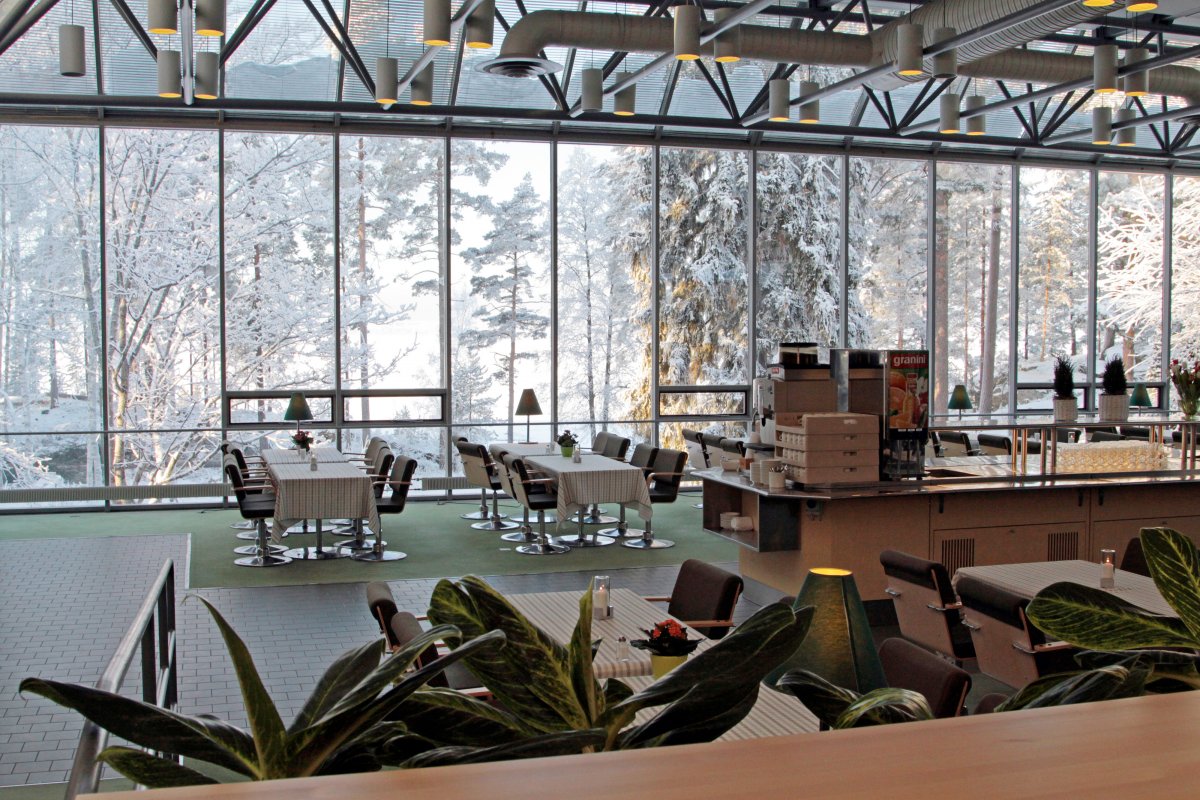 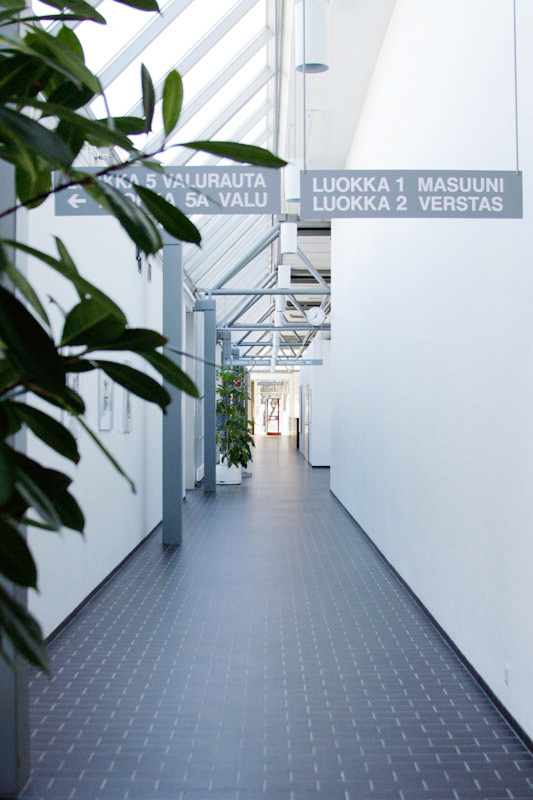 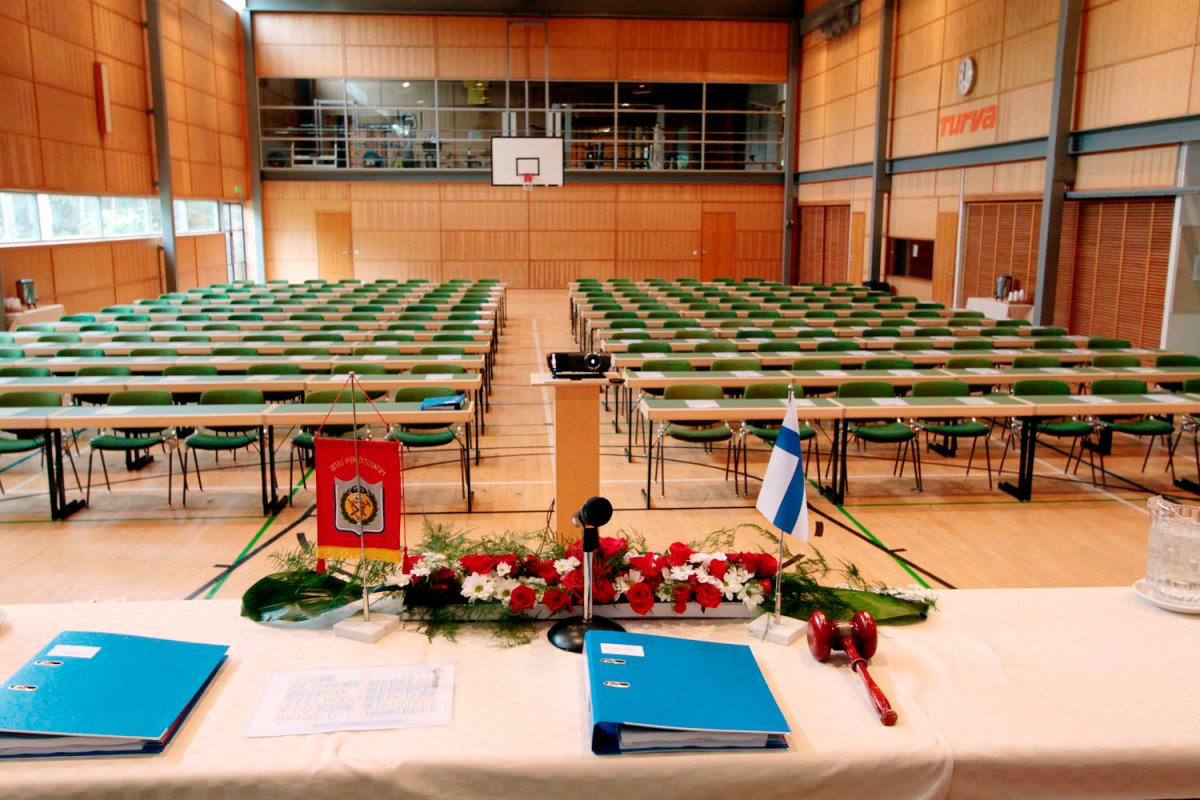 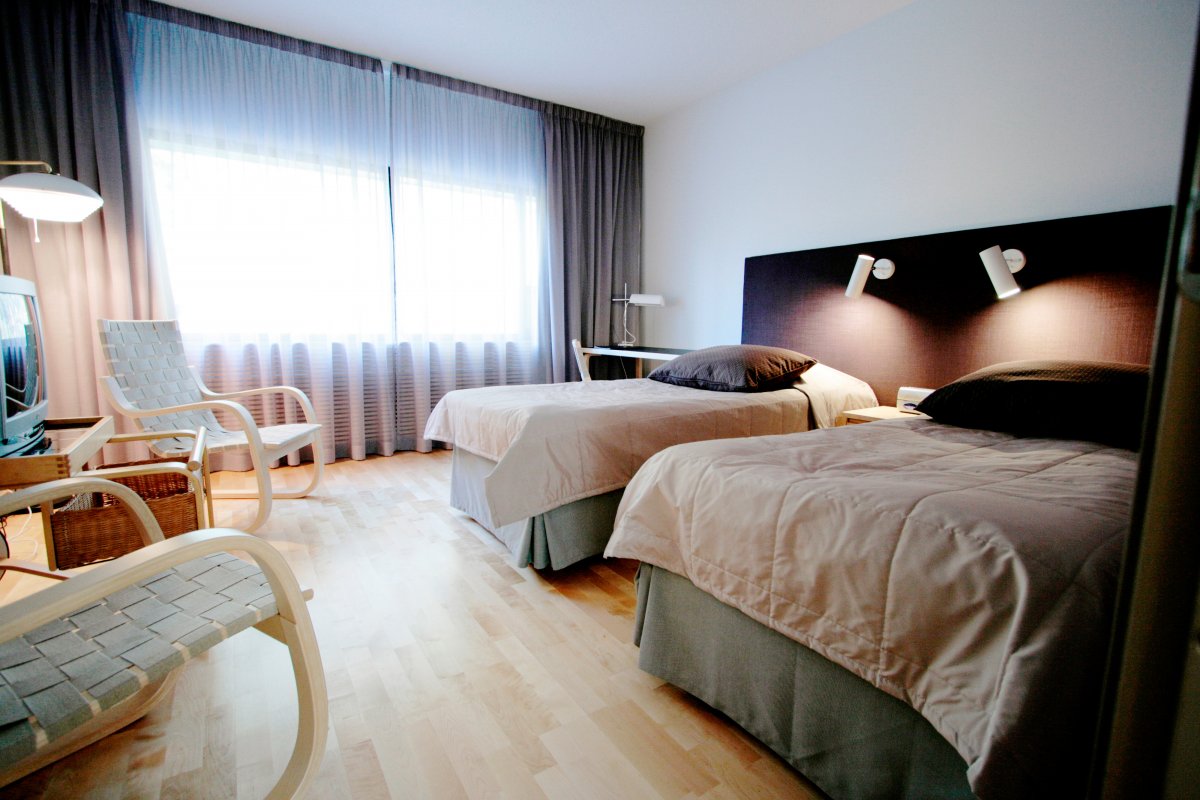 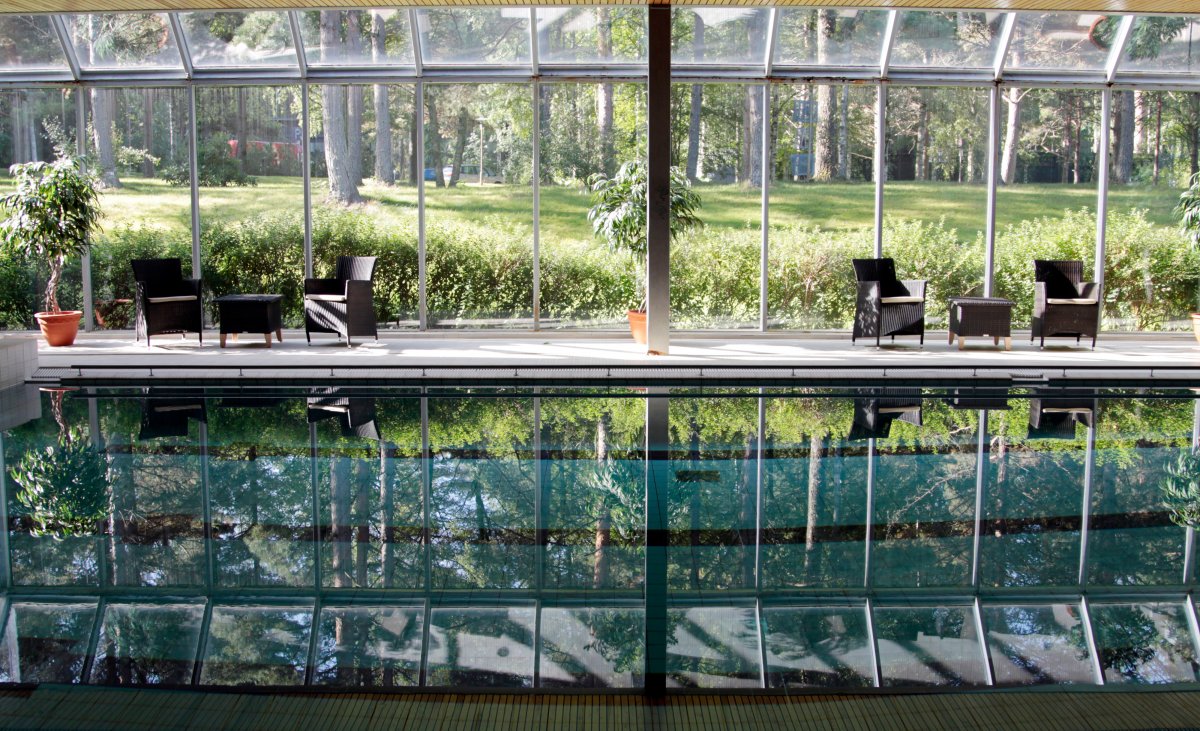