Jyväskylä’s airport is a model of a small provincial travel node. It is made with economy and elegance, and it reminds travellers of the romance of air travel.

Peter Davey, Jyväskylä Livery; of the construction phase of 1988, The Architectural Review 1117, March 1990

Building an airport in Jyväskylä was planned as early as the 1920s. A suitable location was found in the Tikkakoski district and the airport was built in 1939 as a base for the Finnish Air Force, which it served during the war. The Aero company started regular airline service between Jyväskylä and Helsinki in 1946. The first actual terminal building was completed in 1960.

The oldest terminal was extended for the first time in 1988, when a simple one-storey pavilion was built. The programme was limited, but the small building was given spaciousness by a large rooflight and the glass tower of the cafe. The graphite grey ceramic tile used in the facade was developed for the terminal. On both sides of the building in front of the tiled exterior walls, there are long steel-structured canopies, which serve a functional purpose but also lighten the appearance of the facade.

The north-eastern facade of the construction phase of 1988 provides entrance also to the latest extension, completed in 2004. Extension was necessary in order to get up-to-date spaces and technical installations, for the character of air traffic operations had changed, security requirements had been tightened and travellers expected to get modern supplementary services. After the extension, the terminal has sufficient capacity to deal with charter flights and other peak periods. The new structure was built seamlessly to the side of the old terminal so that a completely new facade formed on the side of the airfield and at the gable.

Future needs for conversion flexibility were prepared for by means of a clear-cut floor plan. The spaces for arriving and departing passengers are at the ends of the building, clearly separate from each other. The baggage handling space in the middle area can be later converted into passenger space.

The loadbearing structure of the building consists of concrete-filled steel columns, delta beams and hollow-core slabs. The facade facing the field is a steel and glass wall built as a suspension structure; the frame has tension rod trusses as additional bracing.

The wooden structures and materials communicate the nature of Central Finland and the long tradition of Finnish wood processing industry – and they also lend the building a local identity. The loadbearing structure of the canopy the length of the whole facade facing the airfield is made of glulam arches of planed spruce. The curving soffit is clad with birch plywood. The canopy and its details were designed with great care, in close collaboration with glulam and plywood suppliers and studying structural performance by means of partial models. The facade cladding is made of planed, heat-treated battens and the interior cladding of knotless common alder panels.

When describing the building completed in 1988, Peter Davey paid attention to the view of planes and the runway, thanks to which the drama of flying, taking off and landing is present in the anticipation of travelling. Small in scale, the extended terminal retains this comfortable visual connection.

Further information on the Jyväskylä Airport in Wikipedia 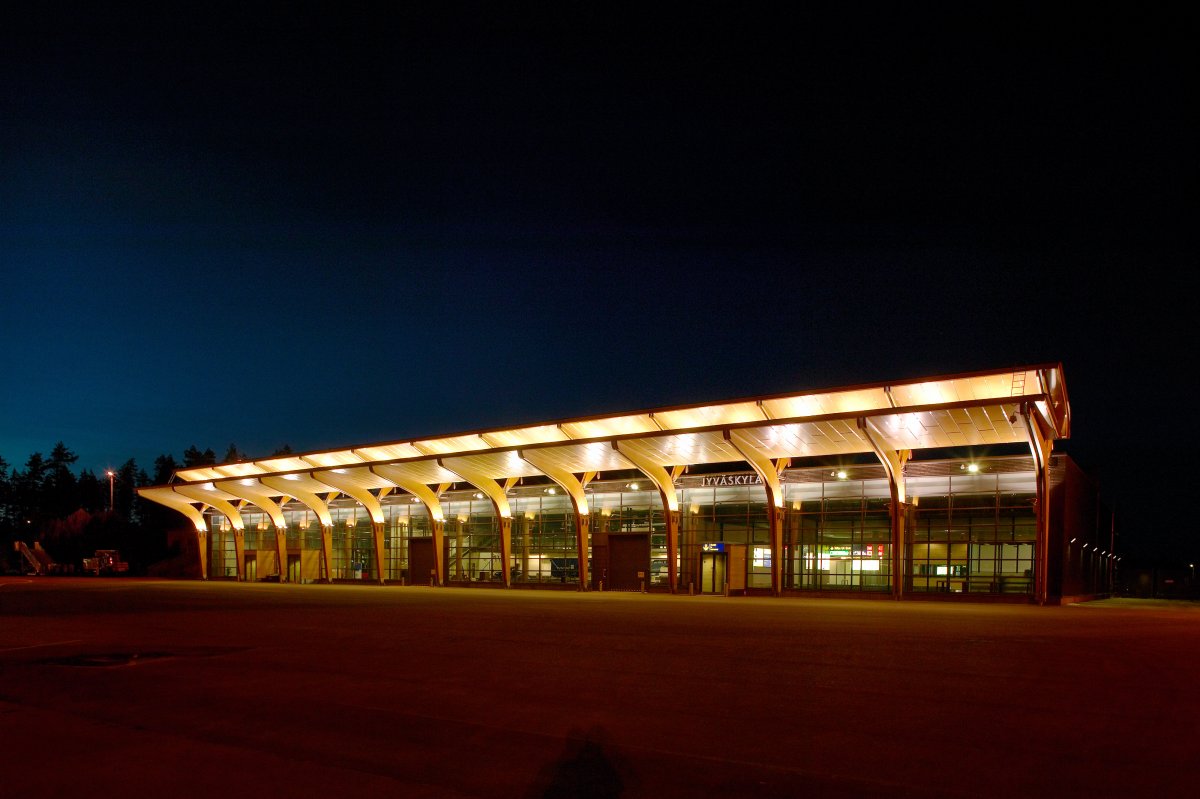 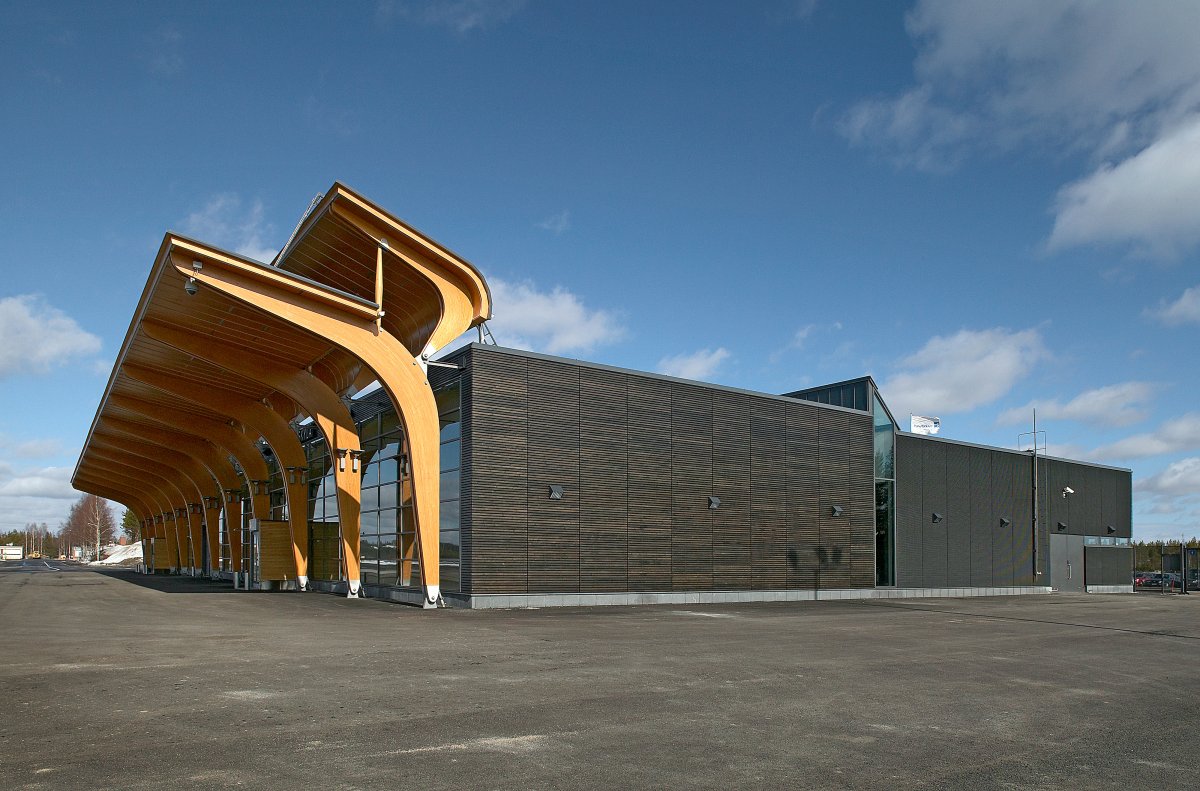 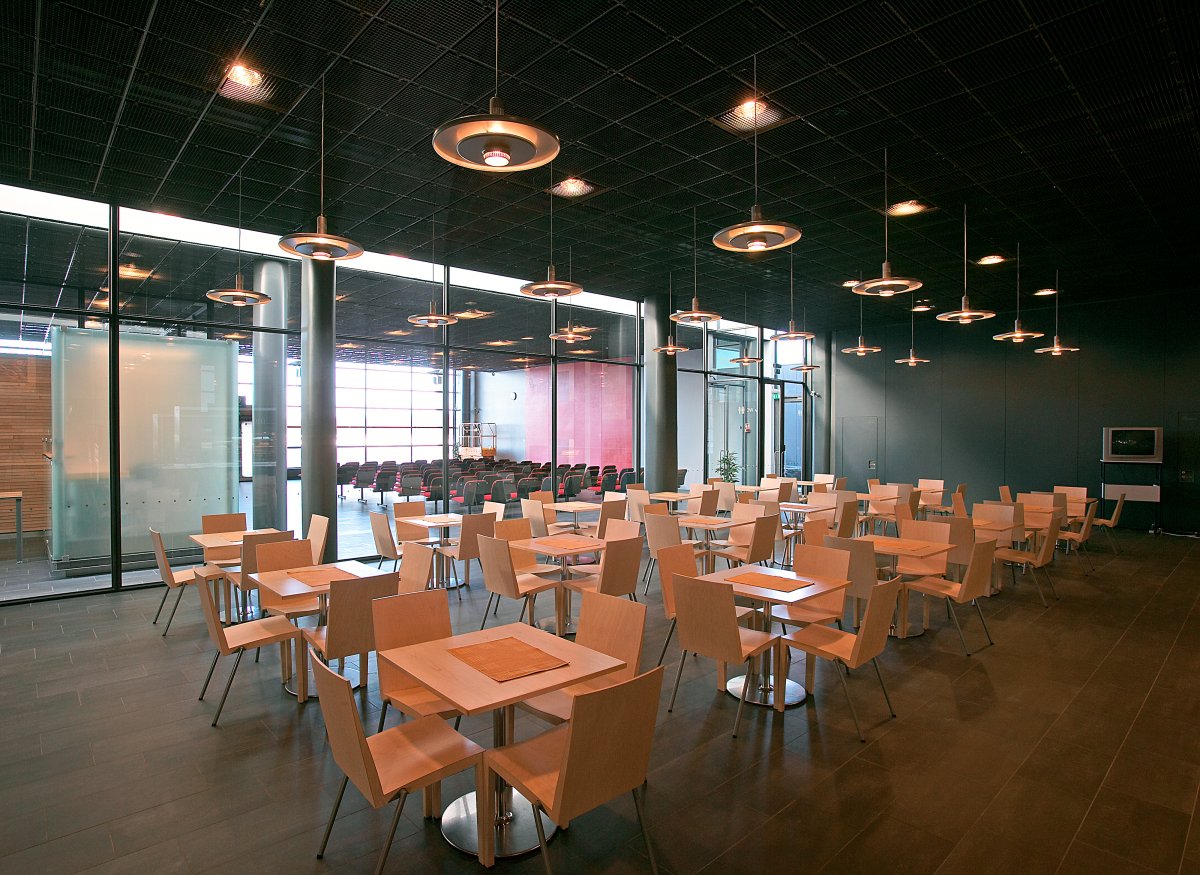